I think that this should be added to the trivia:

This series has a rumor that there are: yellow, a long time trend that started with Hurricanger in which a 3 member series will follow-up after an anniversary series has ended. The theme for the series will be planets and technology so let's all expect 6 more members to join in.

The heroes will transform into the Kyuurangers using a device called Novakyu Changer (please, let it be a brace type). Each ranger will represent a planet that they are protecting. Their spacecrafts are similar to the planets that they protect and the mecha will look like a UFO. Christian3222 (talk) 17:09, November 5, 2016 (UTC)

The is the first season since Kyoryuger to have the English translation of the team's colors in their names. Star Nguyen (talk) 13:17, December 3, 2016 (UTC)

Another translation of "Uchuu"

I think this should also be in trivia:

What could the title mean for the series?

(At least what I've heard; never seen it other than the Super Hero Taisen movies), and Space Sheriff Gavan

we can confirm the season will have a interstellar, or space motif. We can also assume the team will include at least nine members, as "Kyuu" in Kyuuranger, when translated, means "nine".Tubeyou0417 (talk) 02:56, October 3, 2016 (UTC)

Here's the real confirmed Kyuranger suits including 5 core rangers (3 males and 2 females). But it was confirmed via Toei.


Yet to be confirmed allies:
Female Robot: Whitney Moon

well, isn't it interesting that kyuuranger is much like the "once-classified sentai" called Ninja Captor, which the team consists of 7 core members? just IMO btw. :))

One of the trivia pieces should be reworded to "This season is the first season to have a female green ranger on the core team, but the second overall, after Midoninger in the Ninninger V-Cinema." Tubeyou0417 (talk) 01:51, December 6, 2016 (UTC)

Here use this picture. Shows the numbers on the Kyutama much more clearly.

Except, we have always listed teams by their transformation order, notable exceptions being Zeo and Turbo - Zeo because it's 5-4-3-2-1-6 instead of 1-2-3-4-5-6 (keeping Red at the top) and Turbo because it was inconsistent and used Carranger's order, which did utilize the numbers that Turbo did not. Therefore no, we have never ordered by number but by transformation order (which usually turned out being 1-2-3-4-5) - and we won't know that until the show begins airing. So while they do have numbers, that doesn't mean that's how we'll list them. The order should not have been changed, but there's no point in changing it again until it airs since no order is more correct than any other at this point.  Nbajammer  Talk  RW  KR  MH  TK  KI  JD  Garo  TH  CG  UM  GZ  TF  GoT  48  BS  SH  SI  TFs  FF  SO  RE  GA  CT  DQ  05:32,12/28/2016

I know that Sentai has a a thing with a Sixth hero being introduced, but could Kyuranger introduce a 10th hero that could take the place of a sixth hero? (Dragonfly31 (talk) 03:34, December 21, 2016 (UTC))

Actually, we don't know yet for sure. Like I said, we'll have to stay tune for more details once Kyuranger scans will be revealing the Sentai Sixth Ranger sometime starting from February or March. Future Beetle (talk) 21:37, December 20, 2016 (UTC)

The first official series with "-ranger" since Gekiranger

Hebitsukai Silver one has scales on his outfit.

Silver has a bit of snake scales, Gold is a android, Blue is a werewolf, Black is a wrestler, and Red is porabaly generic human with lion powers later. User:Suminoma 19:57, December 24, 2016 (UTC)

suit actors for each rangers have veen reveled http://tokusatsunetwork.com/2017/01/kyuranger-suit-actors-officially-announced/

Finally! We have new pictures for the new series of Uchuu Sentai Kyuranger! Hereare the new photos for the human-type rangers. 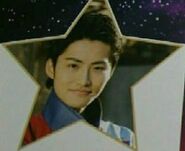 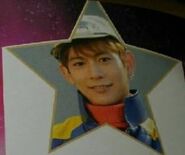 Spada
Add a photo to this gallery

Voice Actors for the 4 non-human Kyurangers

Probably not until the eventual press conference on the show later in the month or until we get data from our usual sources. We won't know anything until then.Aldo The Fox (talk) 18:17, January 14, 2017 (UTC)

Sure, anyone nerdy knows the HHGTTG 42 thing, but is there anything in promo material so far to support that this is actually something the creators are doing on purpose? Until that is confirmed and cited, that bit of trivia should be removed. --Girlnamedlance (talk) 09:36, January 23, 2017 (UTC)

I'd say no, as we have listed refrences like these even if they're unintentional; and if it was intentional or not is disputable, we would say so in the note itself. Examples of this include certain notes on the Cube Komori and Cube Kamonohashi pages. --RedLegend1 (talk) 10:03, January 23, 2017 (UTC)

officially, Toei doesn't respect even its own mother. that tenth Kyuuranger was supposed to be Fake WIKIMARCO (talk) 20:32, February 7, 2017 (UTC)

Good God, this just gets faster year after year. I miss the suspense about 2-4 weeks before the new Ranger.DiamondStarHalo (talk) 20:19, February 14, 2017 (UTC)

Just to add in the Cast section:

When will Kyuranger-related articles be opened for edit?

So I was wonder if this would end up in the trivia section... I wanted to know if my bold statement holds true, it occured to me after I read the synopsis.

Maswartz, read the conversations next time. If you had done so, you would've seen that we were already aware of the HeroShock link.
Anyways, images are starting to pop up, as seen here (not sure if they're up on HS or not; if they are, then something must be wrong with my mobile browser). I've taken the liberty of uploading some of them to the wiki, though there are some I can't quite figure out (i.e. the number on Houou Soldier's Kyutama). --RedLegend1 (talk) 20:35, April 7, 2017 (UTC)

Something tells me that Shishi Red and Houoh Solider has share the same color, but do you think that they have a red color? Future Beetle (talk) 13:21, April 8, 2017 (UTC)

i realized they might not be 13th because i didnt see another kyuranger i just saw another shishi red looking character? —Preceding unsigned comment added by Gunthis1967 (talk • contribs)

What Happend to Houoh Solider why was he or she removed? —Preceding unsigned comment added by Gunthis1967 (talk • contribs)

Gunthis, if I have to tell you again to sign your posts, I am going to start blocking you until you do. You've been reminded enough times in just this thread alone. Houou Soldier is still rumored. For all we know it could be a powerup for Lucky. The suit in the picture looks an awful lot like Lucky's. This is why we wait for confirmations before posting things.  Nbajammer  Talk  RW  KR  MH  TK  KI  JD  Garo  TH  CG  UM  GZ  TF  GoT  48  BS  SH  SI  TFs  FF  SO  RE  GA  CT  DQ  17:10,4/8/2017

If Houou Soldier exists, then I am expecting that Sentai Ranger to be female.
Michael Javier 01:53, April 9, 2017 (UTC) Michael Javier

Seeing as ToQger had some Legend Resshas in their toyline, maybe Kyuranger will have the same thing or not. I definitely would like to see a Voyager version of the Variblune, Big One and Battle Fever Robot, and it's a shame that the Variblune never became a new toy Mecha for Gokaiger, but maybe this could make up for that. Maybe I'm wrong and this doesn't matter, but it would be nice to see somewhere down the line.Cgbhfddcgfsfghtfddcgvb (talk) 15:13, May 23, 2017 (UTC)

As of Episode 18, They are confirmed to be from a Parallel Earth, because the other 40 Sentai are on the Dimension void of Jark Matter. What section would this Info go under?

if they all are parallel universes, then how does Gokaiger fit in, it had all 35 teams in that show so are all of those teams parallel's of the real teams, if so then someone would need to create a Goranger (Gokai universe) team page, all away through Gosaiger (Gokai universe) team. Chasemarc (talk) 20:18, August 27, 2018 (UTC)

I hope this would be like Liveman, because Akihito will ascend the throne in 2019.

It has been weeks already and they haven't confirmed if they will have a team up movie between Zyuohger and Kyurangers.Michael sean yeo (talk) 10:42, December 8, 2017 (UTC)

It should as it is tradition. Probably it could be premiered in February and it could be very similar to Gingaman vs. Megaranger taking place after the end of the series or it could take the place of the Return film. Otherwise, this would be the first series since Kakuranger to not have a VS. Film with their predecessors. Mantor98741 (talk) 03:34, December 11, 2017 (UTC)

It seems that there won't be a Kyuranger vs. Zyuohger, the January Spoilers didn't mentioned anything yet and normally they always confirm this type of movies two months prior it's release (Three in the case of Zyuohger vs. Ninninger). Thought none Toei executive confirmed or denied this film, i started to think that when they announced the discontinuation of Spring Movies, they didn't just refered to the Super Hero Taisen films but also the Sentai vs. Sentai Films. Mantor98741 (talk) 04:49, December 31, 2017 (UTC)

Are you sure? There had been some Post-Anniversary vs. Anniversary movies. There was Hurricanger vs. Gaoranger, Gekiranger vs. Boukenger, and even Go-Busters vs. Gokaiger. If those movies came then certainly a Kyuranger vs. Zyuohger would be possible. Another reason why this should be official is those future Sentai cameos that started since Shinkenger vs. Go-Onger. If previous VS movies, starting with that team-up film, feature those, then certainly, should it be announced, this one will. Martinc1994 (talk) 22:41, December 31, 2017 (UTC)

Completely sure, by this time Kyuranger vs. Zyuohger should be in theaters or announced. The only to ways to Kyuranger vs. Zyuohger happen by now is that it takes the place of the return film or like the VS films originally premiered before Go-Onger vs. Gekiranger, it will premiere in March and or it could be a direct-to-video film like they were before Go-Onger vs. Gekiranger. Otherwise Kyuranger will be the first season since Kakuranger to not have a VS Film thought already is the first one since Juken Sentai Gekiranger to not have one premiered during the run of it's series. Mantor98741 (talk) 03:25, January 14, 2018 (UTC)

I think that if the Kyurangers do not exist in the mainstream Sentai universe, that means it's impossible to have a team up movie between Zyuohger and Kyurangers.Michael sean yeo (talk) 06:55, January 18, 2018 (UTC)

Here is another reason why this team-up should happen: Among the special Kyutamas in the list of Kyutamas are a Zyuohger Kyutama and a Super Sentai Kyutama. Martinc1994 (talk) 08:16, January 24, 2018 (UTC)

There will be a Kyuranger vs Zyuohger team-up. But it will be on TV according to Shinichiro Shirakura. I translated Shinichiro Shirakura‘s tweet on Google Translate. It said “"VS" will do on television this year, so I will not do it in movies.” To me, I’m not sure about this. ChristianRed97 (talk) 16:03, February 14, 2018

He is talking about doing full season of VS: Kaitou Sentai Lupinranger VS Keisatsu Sentai Patranger. There will be no Kyuranger vs Zyuohger team-up. Shaman-aka-King (talk) 02:26, February 15, 2018 (UTC)

Usually, there is a similarity between the sentai and the rider it shares its superhero time with. Is there any for this season? Titoponce1215 (talk) 21:56, December 24, 2017 (UTC)

Where is our final super mecha after Kyutamajin?!

If you mean a Robot that uses everything like what you mentioned, then I'm afraid to say that there isn't one. The closest you can get is the Orion Bazooka formation with all 3 Giant Robots and the 3 remaining Voyagers. Otherwise it's like Kyoryuger and Ninninger and that there is no combination that uses everything. Shinobi Galador (talk) 21:18, January 28, 2018 (UTC)

Retrieved from "https://powerrangers.fandom.com/wiki/Talk:Uchu_Sentai_Kyuranger?oldid=849445"
Community content is available under CC-BY-SA unless otherwise noted.