I think Power Rangers Megaforce will be based on Denji Sentai Megeranger.

Power Rangers In Space was based on Denji Sentai Megaranger. The rumor is that Megaforce will use the video game theme of Megaranger. Nbajammer 16:00, October 18, 2011 (UTC)

I'm in complete agreement on the angel theme of Goseiger being toned down to that of a video game themed series. Check out my user page and take a look at my view on what Power Rangers Megaforce will be like. ChipmunkRaccoon 01:42, February 21, 2012 (UTC)

Here's our first picture of Power Rangers Megaforce in a really high resolution. I think it's important as it's the first picture of the Rangers and, by extension, the confirmation that Goseiger will be adapted. I was going to add it, but it's locked so I'm asking if an admin wants to add it.

Oh crud. Think you can edit it to fix the logo? The "Saban's" seems to have been accidentally cropped out (you can see it's Z-axis). And if it was displayed like that at the licensing expo, someone needs a good ticking off. Digifiend 20:43, June 13, 2012 (UTC)

I'm just happy to add something significant for this wiki, not just some odd trivia DcHallofJustice. Better to use an actual Megaforce picture than a Goseiger picture (Granted, Saban won't have that qualm :) ).
Digifiend, I can't do anything. I just fond the picture and I did see a copy of it posted at some event Saban Brands was at, which was when I knew this was legit. It was an accident on Saban's side, sorry. Monkeyjb1988 12:01, June 14, 2012 (UTC)

No problem, I was actually asking Dchall - he's the one who made the big banners on the homepage, and pretty much all of the wiki's custom graphics except the logo (which is a minor modification of one I made). Digifiend 00:36, June 15, 2012 (UTC)

Soo why are we counting Samurai as two halves of a 18th season, given that Saban officially says Super Samurai is the 19th season and Megaforce will be the 20th to coincide with the anniversary?Gaeaman788: admin on Gundam Wiki 20:43, June 13, 2012 (UTC)

You mean the numbers on the front page? Sentai adaptations. Samurai and Super Sentai are both adapted from Shinkenger, so this wiki lists them as one number. It's already been explained on the homepage's talk page. Digifiend 20:49, June 13, 2012 (UTC)

the season nuber for Power Rangers Megaforce should be season 19. I know saban ruined the numbering because of samurai and super samurai but i count the samurai seasons as season 18 since they are pretty much the same thing.

We're going by the fact that they outrightly named Super Samurai season 19 going by the official Facebook page. -

No. They averted offending people on religious grounds by removing the guardian angel concept. Digifiend 00:31, June 15, 2012 (UTC)
Eliminating the guardian angel thing was a given, no matter when it would be adapted. But if you're talking about Power Rangers fans, I'm sure alot of them were mad that Gokaiger didn't come first, but Saban had to honor the original contract they signed, which was to adapt consecutive sentai, meaning they can't skip over one or go back, but they can intermix them for the purpose of plot (i.e. White Ranger). Me, I can't wait to see evil Jayden lolGaeaman788: admin on Gundam Wiki 06:17, June 15, 2012 (UTC)

Power Rangers Megaforce premieres early 2013 with 22 episodes including holiday specials. The second season of Power Rangers: Megaforce will have the same number of episodes.

Why not Megaforce & Super Samurai will that do for the crossover episode?

Whether to have a crossover episode like Clash of the Red Rangers but it is unknown if all Rangers Samurai appear or only appear Jayden. Angel135 (talk) 17:34, August 27, 2012 (UTC)

I'm not sure if there would be a sixth ranger in this season. In fact a Green Ranger from "Tensou Sentai Goseiger" died in the flashback sequence. --Hornean 03:32, July 13, 2012 (UTC)

Wasn't Ultra Mehaforce already Trademarked along with Megaforce? If so, its a better name than Super Megaforce as a second season. Dont Be a Sad Panda 20:37, July 13, 2012 (UTC)

Both Super Megaforce and Ultra Megaforce were trademarked at the same time. It's far too early to know which, if either, will end up getting used. Digifiend 21:42, July 13, 2012 (UTC)

I think we should wait for official confirmation before adding it to the article, but it seems our yellow ranger will be Ciara Hanna. Digifiend 00:04, July 17, 2012 (UTC)

Seconded on the thought. Ciara will probably be yellow but let's wait for official announcements. Nbajammer 00:09, July 17, 2012 (UTC)

Looks like blue and pink are known now as well. Pink is Kristina Kane and blue is Peter Adrian. Their deleted tweets as good as confirm it, but of course we still lack anything official. Digifiend 00:23, July 20, 2012 (UTC)

The Green Ranger is believed will be the seventh ranger but not for long because the GoseiGreen Tensou Sentai Goseiger dies. Angel135: admin on Doblaje Wiki 06:17, June 19, 2012 (UTC)

I doubt that'll do much with the Green Ranger, as not much footage existed due to the death of the character. He appeared morphed for all of 2 seconds, and only the lower half was seen. The rest of the time he was unmorphed. Given he appeared in all of 2 episodes, it wouldn't be worth the cost to include him anyway. Nbajammer (talk) 13:45, July 23, 2012 (UTC)

In the IMDB confirmed that the first episode is called Megaforce "Megaforce Unite" and it was released on June 10, 2013. Also said to be the only episode recorded by now.

Yep. Anyone can edit it, and it doesn't verify anything it's told. It just takes it and adds to its database. Like Digifiend said, filming hasn't started yet and even if it had there's no way one full episode would be done. There's no way anyone would know the definite title of it, and the premiere hasn't even been announced. Premieres generally occur in February, so already it's wrong.  Nbajammer  Talk  RW  KR  MH  TK  KI  JD  Garo  TH  CG  UM  GZ  TF  GoT  48  BS  SH  SI  TFs  FF  SO  RE  GA  CT  DQ  00:51,9/21/2012

Okay, so I know I'm kind of against the idea of Super Megaforce, but I have a question for you guys:

<poll> Who do think the sixth ranger should be in Super Megaforce? RoboKnight GokaiSilver (since the show will be using the Gokaiger footage, & that the White Ranger was used in the second season of Mighty Morphin Power Rangers) </poll> -- Reynoman forgot to sign this post

Henshin Grid and ToyWiz.com recently posted up names for things coming up in the Megaforce toyline. The following-

Just looked at Rangerboard and they show some new pics showing the Megaforce merchandise as well as revealing names. 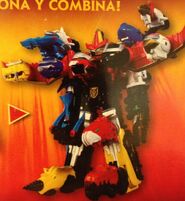 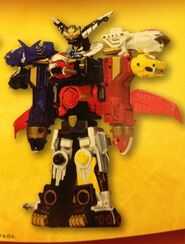 According to this - http://networkedblogs.com/FKZob -, Saban will be pulling a "Dairanger" on us; meaning we'll be seeing the Rangers retain their "Goseiger" suits, but at the same time bring in the "GokaiSilver" suit as well as the mecha used in Kaizoku Sentai Gokaiger, with Power Rangers Megaforce ending with the Legend War scene. If everybody on here knows this already, I apologize. ChipmunkRaccoon (talk) 04:54, December 10, 2012 (UTC)

Another picture to add

Just found this one. Guess we now know for sure that Gosei Ultimate'll be called the "Gosei Ultimate Megazord" in Megaforce.ChipmunkRaccoon (talk) 03:22, January 11, 2013 (UTC)

I've done my best to translate the German writing on the picture of the Gosei Ultimate Megazord toy. As near as I can figure it says the following- "The Gosei Ultimate Megazord transforms from machine mode to robot mode. As a trangle aviator, it strengthens the power of the Gosei Great Megazord." Not sure if this is true or not, but who knows? ChipmunkRaccoon (talk) 04:21, January 11, 2013 (UTC)

Power Rangers Megaforce has only 20 episodes?! Are you frickin' kidding me?! I mean, Power Rangers Samurai & Super Samurai had 40 episodes all together! How are all the bad guys going to fit in only twenty episodes? Also, RoboKnight appears in episode 8? I'm pretty sure his Sentai counterpart appeared in Goseiger WAY after that. Honestly, I can't believe Saban would do this. I mean, I admire Haim Saban's work & all, but sometimes he can do stuff to Power Rangers that can really p--s us off. - Reynoman

yeah dude, chill out, besides, the only reason they make megaforce with 20 episodes is because the next season of megaforce adapts Kaizoku Sentai GokaigerUser:PnFforever(visiting various multiple dimensions) 21:06, January 18, 2013 (UTC)

With the Holiday specials, there are 22 episodes in both seasons, and adding the crossover, given as total 45 episodes. It's confirmed the Holiday Specials for Megaforce, and if there is a crossover with the Samurai Rangers, you may have the same number of episodes that the 2 previous seasons. OmniPowerRangers (talk) 18:42, January 20, 2013 (UTC)

In this photo, the Red Ranger Megaforce has a different costume, and his helmet has no mouth. OmniPowerRangers (talk) 18:31, January 29, 2013 (UTC) http://www.megaforcecast.com/gallery/albums/merchandise/mb/amazon/normal_goseigreatmegazord3.jpg

I agree, the white parts are all either red, gold or black, and the parts normally those three colours are correct. Seems like they just wanted to use fewer colours on that MegaBloks minifig.  Digifiend  Talk  PR/SS  KR  MH  Toku  JD  Garo  TH  CG  UM  Logos  CLG  DW  19:00,29/1/2013

Bandai America plans to release the toys for Gosei Wonder/Gosei Jet in the following order. 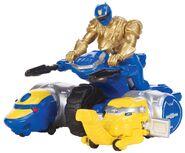 Not the first unadapted Mecha

One of the notes says

Now, not to be a nag or anything, but isn't this inaccurate since RPM didn't adapt Engine Dai-Shogun from Go-Onger?

The note doesn't make that distinction. Engine Daishogun is still mecha, even if it is sentient. So yeah, this note about Datas and Mystic Runner needs updating or removing. Remember, Datas is also a sentient mecha that didn't belong to anyone. I don't think Engine Daishogun was even the first omitted mecha. However, is Datas the first one that wasn't movie exclusive?  Digifiend  Talk  PR/SS  KR  MH  Toku  JD  Garo  TH  CG  UM  Logos  CLG  DW  02:22,3/6/2013

The difference here is that 1) Datas was around the entire season, whereas Dai-Shogun was around for the movie and 2 episodes (a two-parter); 2) The Goseigers could freely summon Datas at will, whereas the Go-Ongers could not summon Dai-Shogun and only utilized him in the above appearances. Mecha by definition is part of a team's arsenal, and if they could not summon Dai-Shogun, then I would say he isn't a part of their arsenal and therefore not a mecha as stated by the note.  Nbajammer  Talk  RW  KR  MH  TK  KI  JD  Garo  TH  CG  UM  GZ  TF  GoT  48  BS  SH  SI  TFs  FF  SO  RE  GA  CT  DQ  03:52,6/3/2013

Even so, shouldn't the note at least be edited to be a little more specific? Like maybe
"This is the first season to exclude a mecha that was commonly used in its Sentai counterpart"?
Pie4ever0 (talk) 21:26, June 4, 2013 (UTC)

Yeah, Datas Hyper was seen as part of Ultra Gosei Great Megazord. They didn't do a very good job of hiding him (if they can airbrush him out, surely they can make the back of the zord plain like the toy version?). While Tensou is Datas's counterpart as the robot buddy, the Zord form wasn't adapted. Datas is no more meant to be seen in Megaforce than Ryuuranger. The Hyper Change Headder is known as Ultra Change Zord in the toyline but wasn't named in show - at least not yet.  Digifiend  Talk  PR/SS  KR  MH  Toku  JD  Garo  TH  CG  UM  Logos  CLG  DW  13:26,5/6/2013

Retrieved from "https://powerrangers.fandom.com/wiki/Talk:Power_Rangers_Megaforce?oldid=301414"
Community content is available under CC-BY-SA unless otherwise noted.