Takeru Shiba (志葉 丈瑠, Shiba Takeru) is Shinken Red (シンケンレッド, Shinken Reddo) of the Shinkengers. He is a young man descended from feudal lords, referred to by his vassals and servants as Lord (殿, Tono).

He was raised since childhood by Hikoma Kusakabe to act the role of the 18th head of the Shiba line after his father gave him the Shishi Origami. His upbringing made him create a facade to look very arrogant and proud to others, claiming none can match his strength and greatness while keeping his cool in any situation. Though he was reluctant to have the vassals fight by his side, as he wanted no one else to bear the burden, he allowed their involvement after giving them the choice to turn back or become Shinkengers out of want rather than need, as long they are willing to finish their mission to the last detail.

By the time Genta arrives, Takeru's facade is revealed as he now questions himself of how it makes him strong along with learning he shares similar attributes with Juzo before defeating him. While at times it may not seem like it, Takeru cares a lot about his vassals and when Genta arrives, he becomes more open with them. However, in a fight against Juzo, it is revealed that Takeru started to value his life more which, in Juzo's words, makes him weaker and makes Takeru doubt himself. After Takeru is injured and taken down by Ayakashi Yomotsugari's Onibidama, Kaoru Shiba, the true eighteenth head of the Shiba Clan, appears and reveals herself as the real Shinken Red, thus exposing Takeru as a kagemusha.

It is revealed that the previous Shinken Red could not defeat Dokoku and his army, and decided to leave the task to the next generation. In order to hide the previous lord's unborn daughter, Hikoma Kusakabe recruited Takeru, who was never a samurai but had great fighting abilities and possessed enormous Mojikara, to pose as the eighteenth head of the Shiba Clan in order to hold Kaoru's pursuers at bay. After Kaoru's failed attempt to seal away Dokoku with the sealing character, she resigned as the 18th head and adopted Takeru as her son, which made him the 19th head and therefore allowing him to continue as Shinken Red once more.

Takeru arrived to help Alata face an army of Nanashi after listening to the hidden Gedoushuu alarm. Takeru and Alata quickly formed their friendship as both have the same mission to protect Earth. Alata took Takeru to Amachi's residence, only to find Takeru's kuroko making a mess unintentionally by preparing a seat for him. Embarrassed, Takeru told them that he didn't need that. After discussing what's going on, Takeru and Hikoma called for his retainers, with Ryunosuke arrived first. However, Ryunosuke fought with Agri because he thought that Agri had been rude to Takeru, getting further upset after Hyde made the Goseigers cosplay as Sengoku period samurai which made Ryunosuke think that they were mocking them. After Hikoma received a call about another attack Takeru, Ryunosuke and the Goseigers went to the battlefield.

Chiaki later arrived during the middle of the fight. However, things were not so helpful after Brajira as Bloodbath Brajira arrived and baited Takeru as Super Shinken Red to clash against him. The true intention of the commotion was in fact, to kidnap Takeru. Takeru later met his teammates, with the exception of Genta. But Takeru had been brainwashed and transformed into Gedou Shinken Red, wiping out the Goseigers alongside his own team. Before his own team could be killed Alata, as Gosei Red, took the damage instead and received a critical injury by protecting them. Fortunately, Genta and Gosei Knight arrived to stop Takeru with the unintentional combination of Mojikara amd Tensou attacks.

Later, Brajira took Takeru to open the seal of Gosei World so he could send the sea of Sanzu River to destroy Gosei World. But he was held up by the Goseigers (excluding Alata and Gosei Knight, who was blown away during his attempt to stop Brajira as Groundion) and Shinkengers (excluding Genta who was busy taking care of the injured Alata) and permanently freed from Brajira's brainwash thanks to the recovered Alata (later joining before the team was about to be finished) with the fire Mojikara-enhanced Tensou attack that he temporarily obtained from Kaoru. Takeru then joined forces with his team, the Goseigers and Gosei Knight to defeat Brajira. Tensou Sentai Goseiger vs. Shinkenger: Epic on Ginmaku

Months after wiping out the last of the Gedoushu, Takeru fought alongside not only his own team, but every single Sentai ranger in existence, against the Empire of Zangyack when it attacked the Earth in the Great Legend War. Takeru was the one of the first Super Sentai Reds seen engaging a Gormin and Sugormin group. After fighting against hundreds of Gormin and their Sugormin commanders. AkaRenger noticed the fleet moving towards them, he gathered all the Rangers together and gave them the order to sacrifice their powers to wipe out the first invasion's armada. Ep. 1: The Space Pirates Appear Gokaiger Goseiger Super Sentai 199 Hero Great Battle

After the Gokaigers defeated the Zangyack invasion, Marvelous released the Ranger Keys/powers back to their original owners, resulting in Takeru and his team getting their powers back. Final Ep.: Farewell Space Pirates

Takeru, alongside his team (Shinken Gold and Princess Shinken Red were absent), among the majority of the Super Sentai heroes, was caught up in the "Super Hero Taisen" incident which eventually resulted in the Super Sentai teams and Kamen Riders joining forces to defeat both Dai-Zangyack and Dai-Shocker. Ironically, Takeru and his team were acquainted with the Great Leader of Dai-Shocker, Tsukasa Kadoya, also known as Kamen Rider Decade, having encountered him before when he visited their world. During the final battle, he is seen fighting Gryllus Worm, Sea Fist Demon Rageku, and Deratsueigar. Kamen Rider × Super Sentai: Super Hero Taisen

was destroyed and the battle was finally over, the Shinkengers appeared standing on a cliff with all the other heroes who appeared to help, to say goodbye to the heroes of recent years before taking their leave. Kamen Rider × Super Sentai × Space Sheriff: Super Hero Taisen Z

Shinken Red appeared as part of a conference of the first 38 Reds led by Red Falcon, whom addressed the Ninningers and Zyuohgers as the greater Super Sentai pantheon intervened to save them from defeat at the hands of the titanic Gillmarda. Empowering the Combination Nin Shuriken to form Wild Tousai Shuriken King, the first 38 Super Sentai further imbued their successors with the power to perform the Zyuoh Ninnin Super Sentai Burst, destroying Gillmarda with the combined power of all 40 Super Sentai. Doubutsu Sentai Zyuohger vs. Ninninger: Message from the Future from Super Sentai

Takeru is the most serious member of his team who generally hides his emotions. He is very cold and strict, especially towards his teammates but cares for them deeply and about their well being. He gradually begins to warm up to them as the series progresses. Due to his strict leadership qualities Takeru is very serious and a no-nonsense person and is also well disciplined. He is very calm and collected but gets angry if anyone harms one of his vessels. Despite being very cold toward his teammates he does love them deep inside his heart and is very proud of them, but won't show his affection in front of them and will always try to hide it due to his stoic nature. He respects everyone and will always be the first one to put himself in danger for his teammates and retainers safety. He values his friends a lot and won't tolerate any harm done to them, a feeling which the others also return.

Go-On Red and Shinken Red draw their swords (Road Saber and Rekka Daizantou) and their swords clash, producing a cloud of red smoke. Go-On Red wishes Shinken Red luck, and both Rangers turn their attention toward the viewers. This is the only hand-off thus far where both Reds are not in the "black room" and are interacting in the real world. (In the Magiranger/Boukenger hand-off, only MagiRed was in the real world) GP Final: Road of Justice

Shinken Red puts his Shinkenmaru away when Gosei Red appears within the mirrored hilt walking towards him. Gosei Red pats Shinken Red on the shoulder and runs off while Shinken Red looks on. Closing Act: The Samurai Squadron is Eternal 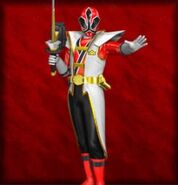 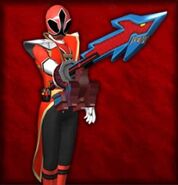 Hyper Shinken Red as depicted in Super Sentai Battle: Dice-O
Add a photo to this gallery

Shinken Red is among the vast pantheon of Rangers which are available in the mobile game Super Sentai Battle Base. In his case, his Super, Hyper, and Gedou forms are available as well.

Shinken Red appears with his team among all Sentai in the mobile game Super Sentai Legend Wars.

The Shinken Red Ranger Key (シンケンレッドレンジャーキー, Shinken Reddo Renjā Kī) is Takeru Shiba's personal Ranger Key and what became of his powers after he along with the rest of the 34 Super Sentai sacrificed their powers to end the Great Legend War.

This key along with the majority of the Ranger Keys were collected by the Red Pirates and later used by the Gokaigers. The Shinken Red Ranger Key was mainly used by Captain Marvelous (Gokai Red), who used it to fight as Shinken Red. It was also used by Gai Ikari and Luka Millfy on one occasion each, and by a young unnamed boy who stole the Ranger Key. Marvelous tested the boy, saying he would give him the Ranger Keys if he defeated the Zangyack. He did well against the Gormin, but when the Action Commander beat him, Marvelous reclaimed the Ranger Key and told him to find another way to help.

After Zangyack were finally defeated, the Gokaigers gave the Ranger Keys back to their rightful owners. It is presumed that Takeru received his key and became Shinken Red once more.

A Shinkenger Zyudenchi which bears the likeness of Shinken Red is part of the Legend Sentai Zyudenchi toyline which can be used in Super Sentai Battle: Dice-O.

Retrieved from "https://powerrangers.fandom.com/wiki/Takeru_Shiba?oldid=752592"
Community content is available under CC-BY-SA unless otherwise noted.