< T.J. Johnson
View source
watch 02:56
Doctor Strange in The Multiverse o Madness - The Loop
Do you like this video?
Play Sound

The robot simply referred to as T.J., or Robo T.J., is an android duplicate of Theodore 'T.J.' Johnson who served as the third Red Turbo Ranger of the Turbo Rangers and his original's alternate on the planet Eltar. He is part of the experiment that created the Robot Rangers.

Retroactively, he is also referred to as Turbo Red Ranger.

Robo T.J. was created by Zordon and Alpha 5 on the planet Eltar and sent to Earth for experimentation. His template was the original human T.J. and his power set was that of the Red Turbo Ranger. The human Turbo Rangers assisted in his and the other Rangers' participation in the experiment.

As part of the experiment, T.J. was fully aware of his true robot state but kept it from Justin who was their controlled subject at the time. Justin however discovered that T.J. was a robot when he caught T.J. charging at his school locker.

In keeping with his template's interests and presumably to keep up appearances, T.J. carried around a walkman, which Justin accidentally broke. T.J. also suffered from damage which he registered as getting 'hurt', same as the other Robot Rangers.

Along with the other Rangers, he battled at least two monsters, which were Flashhead and Voltmeister using the arsenal of the Turbo Rangers along with the Rescue Megazord (on Flashhead). Once the experiment was done, signaled in part by the robot Justin coming to terms with his robot self, the Rangers were called back to Eltar to help Zordon and Alpha 5, with Dimitria noting that someday they may come back to aid the Rangers in another battle.

Many years later, all five core Turbo Rangers appear to help the Mega Rangers battle the Armada's legions of X Borgs and Bruisers in the Legendary Battle.

With all of the Ranger teams well-represented in the Legendary Battle, and Tommy Oliver taking the role of the Green Ranger, as well as the original T.J. as the Blue Space Ranger. The role of Red Turbo Ranger fell upon the robot T.J., bringing to a full circle Dimitria's promise that the Robot Rangers will once again come to the Rangers' aid. Robot T.J. then returns to Eltar. 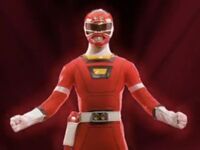