RangerWiki
Register
Don't have an account?
Sign In
Advertisement
in: Unsourced quotes, Turbo, In Space,
and 20 more
English

Retroactively, he is also referred to as Turbo Red Ranger and Space Blue Ranger or In Space Blue Ranger- variations on his in-show labels, though the latter is more in reference to the show itself than a proper label.

T.J. wanted to be a Power Ranger ever since he was a very young boy, unaware that his fantasies would actually come true one day. He was first seen on a bus en route to Angel Grove, riding along with Cassie. Suddenly, both he and Cassie witnessed an attack by the villain Divatox, who captured the then-current Red Turbo Ranger, Tommy Oliver. T.J. fought off the Piranhatrons, and freed Tommy from his prison. Because of his bravery and his assistance in saving others (including an unmorphed Power Ranger), he was hand-picked by Tommy to be his successor in forming the new formation of Turbo Power Rangers as the second Red Turbo Ranger. The team consisted of himself, Cassie, Ashley, Carlos, while Justin (who was with the team from the beginning of the season) stayed on as Blue Ranger. T.J. was friendly and warm hearted, as well as intelligent in his decision making. He also was a star baseball player.

Although he was a very capable team leader, he ended up having one of the worst final showings of any Red Ranger. When pitted against Goldgoyle, regarded as "the most destructive monster in the universe", the end of the series saw the destruction of two Megazords, one of which was set to self-destruct per his order in a failed attempt to destroy the foe, and the loss of the Turbo Powers after Divatox had found and destroyed the Power Chamber.

Demoralized but unwilling to accept their fate, T.J. tells the other Turbo Rangers that they need to go after Divatox, who has left the Earth at Dark Specter's orders, and stop her before she returns to the now-defenseless Earth. Sneaking aboard a NASADA space shuttle, the Turbo Rangers and Alpha 6, sans Justin who elects to stay behind with his father, take off to find Zordon.

Along with Ashley, Carlos, Cassie and Alpha 6, he meets Andros, the Red Space Ranger from the distant planet KO-35. Although not initially receptive of their presence, Andros would later give the four remaining Turbo Power Rangers all-new powers that matched his own, and T.J. would become the Blue Space Ranger and served as the team's second-in-command.

He debatably gives functional leadership of the team to Andros, due to himself being unfamiliar with outer space, but still displays strong leadership skills throughout the series, while Andros was unfamiliar with teamwork. The Rangers spent this time searching for the kidnapped Zordon and protecting Earth from Astronema. During the course of the series, T.J suffered at least two serious head injuries. The first incident was when he was attacked by Darkliptor (a being that was a merging of Ecliptor and Darkonda), which left him with temporary amnesia until he next morphed. The second occurred when Psycho Blue nearly killed him, placing him in the intensive care unit aboard the Astro Megaship, but he swiftly recovered his focus and was able to devise a plan to defeat Psycho Blue by disguising the entire team as the Blue Space Ranger, preventing the from targeting their specific Ranger 'counterpart'. He would remain the Blue Space Ranger for the remainder of the series and would participate in the final battle against the United Alliance of Evil.

T.J. later follows Andros alongside the other Space Rangers to Terra Venture to help the Lost Galaxy Power Rangers in dealing with the Psycho Rangers. He and the other Rangers help destroy the five Psycho Rangers for good, but it cost them the life of Kendrix Morgan. He fought Psycho Blue alongside Kai Chen, his Blue Ranger successor and the Blue Galaxy Ranger.

Once again donning the Red Turbo Ranger powers, T.J. was part of the team of Red Rangers that travel to the moon to face the remnants of the Machine Empire who seek to use Serpentera to destroy the Earth.

He teamed up with Leo Corbett to destroy Automon. It is assumed that he got his Red Turbo Powers back from Lightning Cruiser, similar to how Justin got his Powers back from Storm Blaster. It is in this appearance that his full name is finally revealed.

As Tommy explains the mission to the Rangers during their meeting at NASADA, T.J. mentions the Zeo team (that Tommy was part of prior to Turbo), assuming he knew not only about the Turbo Rangers but the Zeo Rangers as well (as 4 of the 5 carried over from Zeo to Turbo).

T.J. was featured in a chronicle of Power Ranger history compiled by Tommy Oliver shortly after he formed the Dino Rangers, which was found by the nascent Ranger team in the Dino Lab.

Cassie and T.J. were helping the residents of Harwood County before reuniting with their fellow Space Rangers to defeat the Armada once and for all, fighting in a huge battle against hundreds of X Borgs and dozens of Bruisers. T.J. was one of the rangers who saluted the Mega Rangers.

Contacted by who he thought was Tommy but was infact a robotic duplicate in disguise, T.J. was among the Legendary Rangers who were kidnapped and taken to the Antiverse of their old enemy, Lord Draven. Hooked to a computer, an unconscious T.J.'s Morpher was used to create Robo Ranger soldiers derived from the Blue Space Ranger. Fortunately, T.J. and the other captives were soon rescued by their fellow Legendary Rangers. Opposing Draven's goal to conquer the Ranger Dimensions, T.J. morphed once more and fought with not only the other Legendary Rangers but the Ninja Steel Rangers, combining their powers to wipe out the Robo Ranger army. Once Draven was defeated, T.J. joined his fellow veterans in praising their latest successors before returning to his dimension.

He was shown along with the other Space Rangers when the villains were looking for a past villain to revive with the Reanimizer, and came across Psycho Red.

When the Rangers' histories are split into pocket dimensions, the Space Rangers split off, unbeknownst to them, from the main timeline. TJ was having a verbal bout with Andros about the lack of things to do on the Astro Megaship. He is told by Andros to fix something in the ship while the rest retire. Lord Drakkon attacks the Rangers while he is on a separate area of the ship. T.J. disengages the gravity and activates Megazord to try and throw Drakkon off balance but gets his safety line cut by Drakkon in the process.

COMIC STORY- Mighty Morphin Power Rangers 2018 Annual He was later seen in a holding cell block inside Lord Drakkon’s Lunar Fortress waiting with Kelsey, being rescued by the Promethea Rangers, being removed from the dimension.

When the timeline is restored, so is T.J..

TJ as the Blue Space Ranger, is a playable character in Power Rangers Legacy Wars, he is a Common (Leader),Common (Assist) character,also represents Space Rangers, alongside Andros , Cassie and Zhane.

He is friendly and willing to help anyone, even if it means putting his own life on the line to do so. Among other things, he saved the life of a boy who intentionally kept striking him out, and cleared Bulk and Skull's names when they were wrongfully accused of stealing packages. He openly opposes all evil, and is very loyal to his team mates and other Ranger teams.

T.J. is a motivated, intelligent, and athletic. With a cool, calm and balanced nature, this 17-year-old African-American leads by example, not by force. He makes sure everyone works as a team, in synchronicity and harmony. ​He leads by example and not by force. He is the cool and calm balance to Carlos’ hot-blooded character. T.J. is always assessing the situation, making sure that everyone is working together. His kind-hearted, altruistic nature and charming smile draw people to him.[1][2] 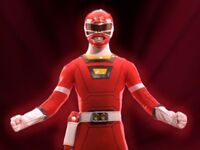 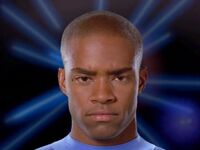 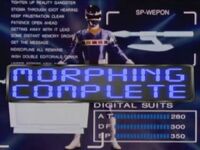 The Turbo Red Ninja Power Star is a special Ninja Power Star that bears the likeness of the Red Turbo Ranger and is marked with the kanji for "red". This star is exclusive to the Ninja Steel toyline.