Buroogen was created by Drop to assist Pierre in finding the remaining Golem Cards created by a combination of the body of the destroyed Magma Golem. When Shou's Green Hover was investigating the area from the potential of a Psyma sighting, Buroogen's supersonic blast shoots him down in the middle of the woods where he ends up protecting three lost women during this period. The other Tatsumi track him down and end up facing Drop while Pierre and Buroogen finally find the Golem Card. Shou regroups with the team and GoGreen strikes down the monster before it is destroyed by the Life Bird.

Pierre revives the Psyma Beast with the Golem Card just found, changing it into Golem Buroogen where it gained a fiery moth-like head and different wings. Using Grand Liner, the team has a hard time getting past its super-defense until Shou realizes that they have to keep hitting it with a barrage of missiles until it lets up its defense, finally allowing for hits to go through and disable it long enough to destroy it with a Grand Storm.

Its main power is a powerful sonic blast which it uses both offensively and defensively; offensively it is used to attack and to annoy; defensively it can use it as a shield. While it gains a sword-like protrusion as Golem Buroogen, its main upgrade is that its sonic shield becomes unbreakable outside a tiny opening for a brief moment. 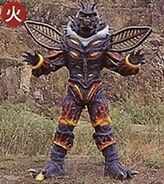 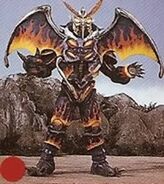 Golem Buroogen
Add a photo to this gallery

Retrieved from "https://powerrangers.fandom.com/wiki/Supersonic_Saima_Beast_Buroogen?oldid=1022843"
Community content is available under CC-BY-SA unless otherwise noted.