Ep. 20: Crimson Fight to the Death! Sunring Mask vs. Akarenger

Sun Halo Mask (日輪仮面, Nichirin Kamen, 15-20), nicknamed the "Star of Africa" (アフリカの星, Afurika no Hoshi), is a ruthless tyrant who was renowned for his successive victories in Africa. He was called to Japan by the Black Cross Führer to help battle Goranger.

He encountered the Gorengers multiple times, usually assisting other Masked Monsters under him and rarely getting into combat on his own. However, as the Black Cross Fuhrer realized his failures and decided to bring in Iron Mask Temujin to assist, Sun Halo Mask enacted one final plan to get on the leader's good side. Using the assistance of Zolders, he faked an injury in order to get on the good side of Tsuyoshi Kaijo, claiming that he was being punished by the Fuhrer and that he was willing to give up secrets to take him down. However the leads that he gave lead to the other Gorengers to become captured and his injuries easily restored, enraging Kaijo for falling for the trick. In a final showdown, Tsuyoshi strikes down Sun Halo Mask in anger with his Spear Bute before destroying him with his team with Gorenger Storm.

Sun Halo Mask is among the vast pantheon of villains which appear in the mobile game Super Sentai Battle Base.

He often used whatever means necessary to win, but often let his cowardly nature get in the way of his operations.

Sun Halo Mask wears orange spandex with black gloves a boots and a yellow cape. His Mask is based off the sun, with yellow eyes and a black painted on moustache, and a black circle to act as the "mouth". 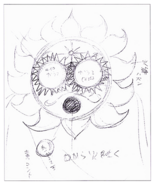 Retrieved from "https://powerrangers.fandom.com/wiki/Sun_Halo_Mask?oldid=1046514"
Community content is available under CC-BY-SA unless otherwise noted.