Retroactively, she is also referred to as the RPM Yellow Ranger or Yellow RPM Ranger, though these are in reference to the show, as opposed to proper labels.

Summer did not start off kind or caring, as she once was a rich and spoiled heiress who seemed not to care about anyone but herself. She lived in a luxurious mansion, where her personal butler was frequently subjected to her mistreatment. Her parents were hardly ever around to take care of her, and she was surrounded by equally spoiled, self-centered friends.

When Venjix forces attacked on her birthday, she was abandoned by her friends and staff during the evacuation, her friends literally throwing her from the transport.

While wandering aimlessly in search of help, she was found by Andrews, who took it upon himself to escort Summer to Corinth. Along the way, Summer began to gain a better understanding and appreciation for what Andrews had done for her all these years, and slowly began to return his kindness. When they were about 20 miles from Corinth, they were ambushed by Grinders, and Andrews was killed protecting her, forcing her to completely abandon her selfish personality to live up to the example he set.

Summer somehow managed to make it the rest of the way to Corinth City, where she reunited with her parents. As the shields were prepared to be raised, she got wind of a report that a fighter pilot had crashed outside of the city. She subsequently took a medical uniform and motorcycle and left to save the pilot despite her parents' objections. She found a downed Scott Truman and helped him return to Corinth before the city's shielding went up, making her rescue of Scott her first significant act of goodwill.

After making it into the city of Corinth, Summer was recruited by Doctor K. Summer now serves as Ranger Yellow. She pilots the Bear Crawler.

When Corinth's shields were raised, Summer asked her parents to allow her to fend for herself. Her parents agreed on the condition that she would get married in a year. When her parents later showed up to have that promise kept, Summer had no desire to. Unfortunately, she soon learned her parents were no longer rich, as their assets had been lost during the Venjix takeover, and was forced to uphold her promise in order for her parents to regain their wealth. Summer ended up not marrying, however, as the ceremony was interrupted when Tenaya 7 came in to try and steal the Landsdown treasure, a Black Diamond. Summer and the rest of the Rangers eventually fended them off. Even though the diamond was lost, Summer's parents finally came to terms with Summer's decision to continue her life as a Power Ranger.

When Dillon and Ziggy arrived in Corinth and were subsequently jailed, it was Summer who first considered Dillon a suitable operator for the Series Black tech, willing to trust him while others would not. While the primary colored Rangers together were able to convince him to join, Summer's words in particular were later instrumental to prevent him from abandoning his duties.

It is revealed that Summer is attracted to both Scott and Dillon. While in the burning Venjix factory, Summer and Dillon almost share a kiss until water falls on them. They then almost kiss again before Gem & Gemma interrupt. Gemma noted in her diary that Summer is totally caring, especially when it comes to Dillon.

After Venjix is defeated for the last time, Summer leaves Corinth with Tenaya and Dillon to help rebuild the ravaged world.

Summer along with the other Ranger Operators and other Ranger teams are seen in Troy's premonition about the Legendary Battle.

After that, the Mega Rangers meet Robo Knight, Summer is seen in a flashback when Troy relates his visions about the Legendary Battle.

Emperor Mavro was defeated, but the remaining thousands of X Borgs still stand. Tommy gathered all the existing Power Rangers, Summer returned with her fellow Ranger Operators as part of the army of Legendary Rangers led by Tommy that helped the Mega Rangers to defeat the Armada once and for all, fighting in a huge battle against hundreds of X Borgs and dozens of Bruisers. After the demise of the X Borgs, Tommy shook hands with Troy and teleported off along with Summer and the Legendary Rangers. She then returns to her home dimension in the RPM World.

During his research in the Ranger archives, Devon Daniels finds information of the Ranger Operators in another dimension and sees a picture of Summer and his team with Doctor K.

Upon learning Venjix has returned under his reborn alias of Evox in the dimension where the Beast Morphers live, Doctor K provides her assistance to get Nate Silva to make up for his mistakes and tells the story of her and the Ranger Operators while flashbacks of Scott, Summer and Flynn appear.

When events set into motion by Lord Drakkon caused the timeline to split into a pocket universe, each anchored on a powerset, the Ranger Operators were split off into their own pocket universe.

In Corinth city, Summer along with the other Ranger Operators and the military defend the frontier of Corinth city, fighting against more Rangers Sentries.

Summer attacks a Blue Samurai Sentry with a flying kick, Summer along with the other Rangers, little by little are getting tired during the battle until the Tyrannosaurus Dinozord drove by Jason and Lauren to help them, causing a brief retreat of the Ranger Sentries.

Lost her powers by Drakkon

During another fight in Corinth against Lord Drakkon's Forces, Summer fights against a Sabertooth Sentry and Green Zeo Sentry. She with Scott and Flynn are surrounded by several Sabertooth Sentries but are saved by Lauren who continue the fight.

Summer is seen figthing against a Mastodon Sentry but came face to face with Drakkon and all the Rangers decide to attack Drakkon but are easily defeated by Drakkon himself, also he steals her Morpher, leaving Summer unable to morph again. Fortunately, reinforcements arrived to help the Rangers are other Ranger survivors rescue by Time Force Pink and Mighty Morphin Pink Ranger from other timelines. However, she goes to the Command Center alongside the other Rangers and Doctor K. It's later unknown what became of her fate after Drakkon stolen her Cell Shift Morpher and the Rangers teleported to the Command Center.

Summer is seen briefly in Tommy Oliver's vision when an alternate Kimberly aim a Green Chaos Crystal at him.

Summer's timeline is later restored by the Mighty Morphin Rangers after they defeated Drakkon.

Summer as Ranger Operator Series Yellow along with Scott, Flynn and other several Rangers are seen in Jason Lee Scott's flashback and vision to the battle on the Moon of Shattered Grid, Summer is seen figthing against Mastodon Sentries.

Summer, Scott, and Flynn are seen briefly in a fragment of the reality when the Emissaries Three observes all the Ranger realities.

In the timeline of the World of the Coinless, Lord Drakkon himself tortures the Mysterious Prisoner Ranger. Drakkon reveals to his prisoner some Ranger realities. The first reality is the Dino Charge World of the Dino Charge Rangers are seen fighting against Vivix. The second reality is the RPM World, where Summer and the other Ranger Operators are seen fighting against Grinders.

Summer along with the other Ranger Operators are among all the Ranger teams which appear in the Korean-developed mobile game Power Rangers Dash.

She has a kind personality, willing to trust others and give them the benefit of the doubt, even when no one else is willing to. She isn't above getting down to business when necessary, however. Summer is proficient at martial arts, making her a skilled combatant. She is also skilled at, and enjoys riding motorcycles.

Before, she has a bratty and spoiled personality due to her parents' wealth but thanks to her loyal butler who taught her humility, her attitude changed. As evidenced in the two part Ranger Yellow story, Summer has become disgusted with her parents (mostly because they wanted to marry her off to require wealth) and their inability to understand she is not like them anymore. However, by the end of the story, Summer has managed to mend her relationship with them; they finally accept her new life and decide to get jobs.

Episodes when she uses her energy blast: 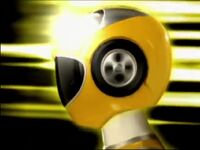 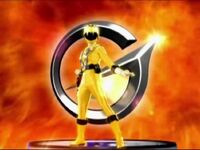 The Ranger Yellow Key is Summer's personal Ranger Key. This key along with the majority of the Core Ranger Keys are seen lining the Command Center's interior walls. This key is mainly used by Gia Moran (Super Megaforce Yellow) who uses it to fight as Ranger Yellow.