In an effort to better caotegorize the content on the site and to determine which pages would need a ViewerAdvisory template, we are now including movie and TV ratings on season, movie, episode, and other applicable pages.

The MPA film rating system is used in the United States and its territories to rate a motion picture's suitability for certain audiences based on its content. The system and the ratings applied to individual motion pictures are the responsibility of the MPA. The MPA rating system is a voluntary scheme that is not enforced by law; films can be exhibited without a rating, although most theaters refuse to exhibit non-rated or NC-17 rated films.

The TV Parental Guidelines are a television content rating system in the United States that was first proposed on December 19, 1996, by the United States Congress, the television industry and the Federal Communications Commission (FCC), and went into effect by January 1, 1997, on most major broadcast and cable networks in response to public concerns about increasingly explicit sexual content, graphic violence and strong profanity in television programs. It was established as a voluntary-participation system, with ratings to be determined by the individually participating broadcast and cable networks.

The ratings were designed to be used with the V-chip, which was mandated to be built into all television sets manufactured since 2000 (and the vast majority of cable/satellite set-top boxes), but the guidelines themselves have no legal force, and are not used on sports or news programs or during commercial advertisements. Many online television services, such as Hulu, Amazon Video, and Netflix also use the guidelines system, along with digital video vendors such as the iTunes Store and Google Play and digital media players, including the Amazon Fire TV, Apple TV, Android TV, and Roku platforms.

The content descriptors commonly seen with the main ratings are as follows:

As far as the wiki goes, only FV will likely be used the most, though with the franchise's ever-evolving landscape, there is a chance that could change.

The Entertainment Software Rating Board is an official rating system for video games that is used within the United States, Canada, and Mexico (via a cross-rating system of the General Directorate of Radio, Television and Cinematography). It was established in 1994 after the senate hearing about violence in video games.

The ESRB rating system consists of 5 ratings. E, E10+, T, M, and AO. There used to be a preschool rating named eC but that was discontinued in 2018.

Eirin (映倫, Eirin) is the abbreviated name for the Film Classification and Rating Organization (映画倫理機構, Eiga Rinri Kikō), the organization responsible for creating Japan's film rating system. Eirin was established on the model of the American Motion Picture Producers and Distributors Association's Production Code Administration in June 1949, on the instructions of the US occupation force. It classifies films into one of four categories depending on their suitability for viewing by minors of different ages.

In comparison to the United States or other countries, Japan doesn't have a rating system for its T.V. shows. While yes, there is some form of censorship that can happen, there's no specific set of categories any of Japan's shows has to follow.

The Computer Entertainment Rating Organization (特定非営利活動法人コンピュータエンターテインメントレーティング機構, Tokutei Hieiri Katsudō Hōjin Konpyūta Entāteinmento Rētingu Kikō) (or also abbreviated as CERO) is a Japanese entertainment rating organization based in Tokyo that rates video game content in console games with levels of ratings that informs the customer(s) of the nature of the product and what age group it is suitable for. It was established in June 2002 as a branch of Computer Entertainment Supplier's Association, and became an officially recognized nonprofit organization in December 2003. 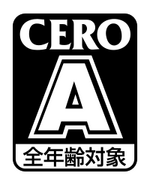 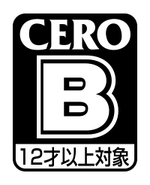 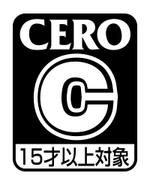 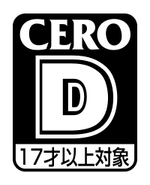 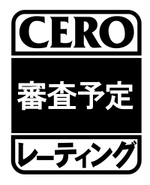 Q: "How do I find ratings for a specific show and/or movie?"

A: Here's an initial list to help get you started:

Q: "Wait, did you forget to include some ratings?"

A: No, we purposefully left some out as they aren't entirely applicable to Power Rangers nor Super Sentai, especially considering some of those ratings are used for adult films or games.

Q: "Which pages should the ViewerAdvisory template be used on then?"

A: Ideally any piece of media with a rating of R or R15+ for movies, TV-MA for T.V., and ESRB M or CERO D for video games.