As stated and understood, Demos is potentially the ultimate Psyma Beast; though merely an egg, the possibilities of what it could do when hatched allowed for the possibility of the destruction of Earth on its own. Denus leaves the egg in the care of Pierre to hatch, but he ends up losing it when Reggie, a thief notable and infamous to Daimon Tatsumi, steals it. Knowing of the trouble he'd have with Denus in losing the egg, Pierre summons Zylpheeza's Psyma Beast Garaga (GoGoFive) to help retrieve it, which it comedically fouls up by confusing Pierre's requests for "the egg" with "chicken eggs he realizes its value and decides to hold it hostage to lure both sides. Ultimately, he appears to throw the egg to Garaga appearing to give it back to the Psyma, but in truth allowed this so the rescue heroes could simultaneously use their Calamity Breaker both on it and Garaga, destroying both Psyma Beasts at the same time. 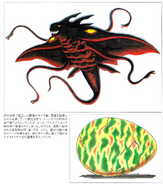