Inconsolable, Unmotivatable (やるせなく、やる気なく, Yarusenaku, Yarukinaku) is the seventh episode of Ressha Sentai ToQger. The Diesel Ressha is first mentioned and makes a cameo appearance in this episode.

After getting too emotionally involved in a ninja movie, Kagura accidentally breaks Hikari's kendama toy, and thinks that he won't forgive her. However, the Ressha stops at a new Dark Station where Hanko Shadow has made everyone lose their motivation, and Right, Tokatti, and Mio fall under his spell.

To exploit the special properties of Kagura's Imagination, the other ToQgers decide to have her watch some ninja movies. However, she ends up getting too emotionally involved with it and accidentally breaks Hikari's kendama toy, much to his anger. The next day, the ToQgers arrive at Mukiryokuzaka Station, where the Shadow Creep Hanko Shadow uses his Stamp Gloves to render all citizens devoid of all motivation. Instead of thinking on a plan, Right jumps head on to fight the monster, just to fall under his thrall. Mio and Tokatti are also struck as well, but the Creep retreats after his leg is injured during the fight. Back on the Ressha, Kagura looks to Hikari who is lost in his thoughts and wonders if he is still angry at her for breaking the toy. He realizes this and apologizes to her for being angry over such a simple thing, and for letting her think that he is still mad at her. Having come up with a way to fight Hanko Shadow, ToQ 4gou and 5gou confront the monster once more, and by having ToQ 5gou imagine herself as a solid and impenetrable rock, ToQ 4gou uses the Tunnel Axe to transform her into a huge Kendama in order to attack the Shadow Creep while keeping a distance. The plan works, and after deceiving Hanko Shadow by briefly exchanging their Ressha, the two manage to destroy Hanko Shadow's Stamp Gloves and return all of his victims to normal, including the other ToQgers who join the battle and together, they defeat him with the Renketsu Bazooka. Once Hanko Shadow enlarges itself, the ToQgers form ToQ-Oh CarCarrier to defeat it, with Kagura finally putting her newfound ninja skills to use. Back on the Ressha, Kagura thanks Hikari for not being angry at her anymore and she realizes that he cares for his kendama because it must be a gift from someone important to him. However, the ToQgers rest is cut short when the Conductor announces that they have spotted another Support Ressha. 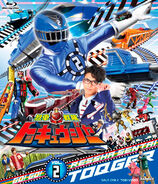 Retrieved from "https://powerrangers.fandom.com/wiki/Station_7:_Inconsolable,_Unmotivatable?oldid=887220"
Community content is available under CC-BY-SA unless otherwise noted.