Station 45: The Home We Left Behind

Station 45: The Home We Left Behind

The Home We Left Behind (君が去ったホーム, Kimi ga Satta Hōmu) is the forty-fifth episode of Ressha Sentai ToQger.

The ToQgers have managed to free Subarugahama and Tokatti has figured out a way for them to become children again, but Right is not sure what to do after transforming into Dark ToQ 1gou in his fight with Emperor Z.

Miss Glitta begins to relocate Castle Terminal while Hyper ToQ 6gou drags Baron Nero and Marchioness Mork out of the fortress, freeing Subarugahama from the darkness. But the victory is short lived when the ToQgers find Dark ToQ 1gou fighting Z-Shin on equal terms before Baron Nero and Marchioness Mork retrieve their master on a Cryner that they use to chase after Castle Terminal. Akira then takes the unconscious Right to Ressha, the president revealing that Right absorbed some of Emperor Z's darkness the night Subargagama was consumed in the darkness. This event created a symbiosis between Right and Emperor Z that has been effecting both sides with each encounter and culminated with Right's Dark ToQ 1gou form. Meanwhile, Emperor Z finds Glitta and learns that her actions were an act of mercy and pity to him. After apparently killing Glitta, now intent on destroying all light if he cannot have it, Z-Shin decides to mount an assault on the world and orders Castle Terminal to surface. Meanwhile, as the other ToQgers are delighted at the sight of their hometown restore, Right learns from the president that no one in Subarugahama will remember him as a consequence of being in the darkness for too long. When Right asks if there is chance for the others not to share his fate, he learns he must destroy their Rainbow Passes to have them forget being ToQgers. Getting the passes as Akira alerts him to Castle Terminal's appearance, Right abandons his friends in the Ressha. After Wagon regretfully burns the passes, the other ToQgers revert to their original childhood forms and lost all memory of their days as ToQgers. Akira makes sure the ToQgers return to their families and normal lives. Back on the Ressha, after finally resolving his frustration with getting Ticket off the Conductor's hand, Right decides to storm Castle Terminal on his own. While Akira rushes to assist him, Right faces the army of Close as Dark ToQ 1gou but is unable to imagine himself winning this battle. 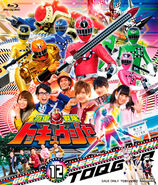