When Dollhouse Shadow attacks the ToQgers, Hikari and Kagura are trapped inside its dollhouse which will burn and kill them if they cannot find a way out or if the others cannot stop it.

Upon returning to Castle Terminal with Barone Nero, Marchioness Mork sees that Emperor Z has accepted that he can never obtain the light, deciding to confirm a theory she has over the cause of Emperor Z's obsession. Later, after Kagura wakes up from a nightmare where her family does not recognize her all grown up, the Ressha comes under attack by the Shadow Creep Dollhouse Shadow. Overpowering the ToQgers, Dollhouse Shadow sucks ToQ 4gou and ToQ 5gou into a dollhouse before running off. After knocking Hikari and Kagura out, Dollhouse Shadow sends out a challenge to the ToQgers to meet him in Moriiwadake Station within five minutes or he will burn the dollhouse containing Hikari and Kagura. This infuriates Right as he and the others run towards Moriiwadake, fighting their way through several Close. But Dollhouse Shadow gets bored and starts to burn the dollhouse prematurely, with Hikari and Kagura's escape route out blocked. After Hikari figures out a means of escape involving his kendama, inspired by seeing Kagura's restored shoe outside after it managed to get out but she did not, he helps ease Kagura's mind with his own resolve to protect his family. Though it seems they have died in the burning dollhouse just as their teammates arrive, ToQ 1gou taking it hardest, ToQ 4gou and ToQ 5gou reveal themselves alive and well as they overpower Dollhouse Shadow before the Shadow Creep is destroyed by Hyper ToQ 1gou. The enlarged Dollhouse Shadow then attempts to trap Cho-Cho-ToQ-Dai-Oh in another dollhouse, only to get sucked in as well and easily destroyed within. Marchioness Mork has observed the events the whole time, and has her suspicions about Right confirmed as she says the youth is the reason why Emperor Z subsumed Subarugahama in particular. Elsewhere, ToQ 6gou is troubled from sensing a familiar darkness coming from Right's body. 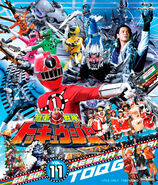 ToQger Volume 11, Blu-ray cover
Add a photo to this gallery

Retrieved from "https://powerrangers.fandom.com/wiki/Station_43:_The_Unopening_Door?oldid=823456"
Community content is available under CC-BY-SA unless otherwise noted.