Station 39: The Beginning of the End

Station 39: The Beginning of the End

The Beginning of the End (終わりの始まり, Owari no Hajimari) is the thirty-ninth episode of Ressha Sentai ToQger.

With Christmas approaching, Imagination begins to run wild which makes the Shadow Line weaker. Right, however, realizes Akira is missing, while General Schwarz plans an offensive against Emperor Z and various defeated Shadow Creeps suddenly revive one after another.

With Christmas approaching, the Shadow Line becomes less active due to the increasing amount of Imagination everywhere, giving the ToQgers a chance to rest and celebrate the holiday themselves. Meanwhile, General Schwarz appears before Akira and urges him to fulfill his part of the bargain they previously made and join his side to launch an attack on the weakened Castle Terminal. At the castle, Emperor Z is also feeling the symptoms of the lack of Darkness and Madame Noir intends to take the opportunity to rescue her daughter. Wishing to have Akira celebrate Christmas with them, the other ToQgers pay a visit to the Build Ressha, but they find that he has left the Drill Ressha behind as well as instructions on how to detect Shadow Towns with it. Although they are worried by the sudden disappearance of their friend, the ToQgers are suddenly called to action when the Shadow Creeps they have previously defeated start appearing again, but far weaker than when they last fought them. They are unaware that they are just copies created by Boseki Shadow, who was imprisoned for his power of absorbing Darkness being dangerous to the Shadow Line. Marchioness Mork asks Boseki Shadow how he has escaped and learns that he was released by Madame Noir, confirming that she intends to turn against the Emperor once again, as the ToQgers battle the copied Shadow Creeps. Boseki Shadow is then destroyed by the ToQgers' Hyper 5 Connection Crash and enlarges itself, thus the team forms ToQ-Oh and Diesel-Oh to fight him. However, they are distracted by their worries about Akira, affecting the battle, until they decide to focus and form Cho-Cho-ToQ-Dai-Oh combined with the Police Ressha to bring Boseki Shadow down for good. Soon after, the ToQgers are informed that General Schwarz's Kuliner is nearby and they decide to confront him, but much to their surprise, Akira appears before them, stating that he is now working under General Schwarz and transforms into ToQ 6gou to fight them. 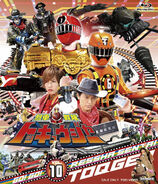