Station 33: Number One at Karate

Station 33: Number One at Karate

Number One at Karate (カラテ大一番, Karate Ōichiban) is the thirty-third episode of Ressha Sentai ToQger.

With their memories back, Right and Hikari must use their training in karate from Right's grandfather to defeat a Shadow Monster who has turned the people around the next Dark Station into his fighters, rather than Kuros.

With their memories back, Conductor and Ticket noting their maturity, the ToQgers train with Right and Hikari after both remember that Right's grandfather taught the two of them karate. Before Right and Hikari can spar, they and the other ToQgers are alerted that a neighboring station has been taken by the Shadow Line. The ToQgers arrive to the Chūdoku Dark Station where they are attacked by martial artists, until their dojo leader stops them upon seeing Right and Hikari's skills. The dojo master explains that the Shadow Creep Chūshaki Shadow has placed poison injecting bracelets on everyone and that they have until sunset to defeat him by going through a gauntlet of battles in a building. Before the ToQgers enter the building, Chūshaki Shadow forces them to play by his rules by fighting without their powers while wearing Bracelet Syringes, as well. The ToQgers regroup back the Ressha, and Hikari forms a plan involving him and Right as a diversion while the others are on standby in the Dash Cars. Once back at the building, telling Right of how he lost their sparing match in the past and actually had their sensei's support, Hikari tells him to consider their act a game before they and the dojo master go through the gauntlet. Once Right and Hikari reach the top, the other ToQgers make their move before the "Chūshaki Shadow" they have been fighting is revealed to be a decoy. However, feigning a fight between himself and Right as the sun begins to set, Hikari reveals that the dojo master is actually Chūshaki Shadow, who assumed the dojo master's form after kidnapping him. Hikari and Right strike the Shadow Creep's syringe, ending his control over the town. The ToQgers then transform, with Hyper ToQ 1gou knocking Chūshaki Shadow out of the top floor window before following him to the ground floor, destroying the Shadow Creep during their descent. When the revived Chūshaki Shadow enlarges and renders Cho Cho ToQ Dai-Oh powerless, Hyper ToQ 1gou uses Hyper Ressha Tei-Oh to destroy the Shadow Creep. Soon after the Ressha leaves, Hikari reveals that he used the gauntlet to test which of them is the better fighter by having defeated more Close, leaving Right to mope over his loss. 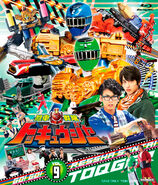