Determination (決意, Ketsui) is the thirty-second episode of Ressha Sentai ToQger. This episode marks the debut of the Hyper Ressha and Hyper Ressha TeiOh.

After the President of the Rainbow Line disbands the ToQgers, Right feels he is wrong and insists that he and the others continue the fight against the Shadow Line.

After the President of the Rainbow Line disbands the ToQgers, Right feels he is wrong and decides to talk to him directly for answers. However, on the way, the ToQgers see themselves as children in their reflections. Going back to the Ressha in confusion, the ToQgers learn that they are still children whose Imagination had saved them from the darkness consuming Subarugahama. Furthermore, with the President using their Imagination to give them adult ages to fight the Shadow Line, the disbandment is revealed to be for their own good as the darkness would eventually make them adults forever. While ToQ 6gou holds off the remaining Dining Set Brothers as they make their way towards the Hyper Ressha Terminal, Right resolves to continue fighting even if it means not being able to return to his original age. Eventually, the other ToQgers follow suit and save ToQ 1gou and ToQ 6gou. The six ToQgers overwhelm the Dining Set Brothers before using a Hyper 5 Connection Crash and Yudo Breaker combination attack to defeat the Shadow Creeps with Cho-ToQ-Oh Police Fire and BuildDai-Oh formed to fight them. But when the Dining Set Brothers gain the upper hand, the President gives the ToQgers permission to use the Hyper Ressha with Hyper ToQ 1gou transforming it into Hyper Ressha Tei-Oh to take out Table Shadow after Chair Shadow is destroyed. While the Conductor and the others deliberate the President's reasons and the path their friends have chosen, the ToQgers finally remember their full names and sing "Twinkle Twinkle Little Star" while looking at the night sky, just as they did when they were children. At Castle Terminal, still weakened from from his previous attempt to reach the Hyper Terminal Terminal, Emperor Z sings the same song as well. 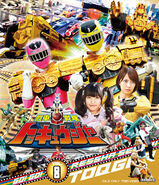 Retrieved from "https://powerrangers.fandom.com/wiki/Station_32:_Determination?oldid=865807"
Community content is available under CC-BY-SA unless otherwise noted.