Right Out of a Fairy Tale (おとぎ話が飛び出して, Otogibanashi ga Tobidashite) is the twenty-fifth episode of Ressha Sentai ToQger.

In the next Shadow Town, the ToQgers come across various fictional characters, with Tokatti's favorite childhood superhero Ryo Knight appearing before him to encourage him, but all is not as it seems.

After overexerting himself while training with Right and Hikari for the next Shadow Town, Tokatti falls asleep on the couch while Mio treats his wounds before the ToQgers arrive to the Otogi Dark Station where they encounter fairy tale characters brought to life by Pinspo Shadow as part of Emperor Z's scheme to acquire the light from the fictional characters. However, Emperor Z is disappointed by the fairy tale characters' lack of light as Barone Nero offers to take over and orders Pinspo Shadow to destroy them in hopes it would stir up inner darkness. While ToQ 6gou holds off Baron Nero and Pinspo Shadow, the other ToQgers spirit the fairy tale characters away. ToQ 2gou remains behind before he is saved by a figure he recognizes as Ryo Knight; Tokatti explains to Mio and Kagura that Ryo Knight is a super hero he made up as a child. The Shadow Line forces eventually find them as the ToQgers and Ryo Knight fight them side-by-side. But with Ryo Knight's encouragement, ToQ 2gou decides to use the training he and the others did to drive Baron Nero back before the ToQgers use a Fairy Tale Collection variation of the Rainbow Rush to finish Pinspo Shadow off. When Pinspo Shadow is revived, ToQ-Oh and Build Dai-Oh are formed to fight the enlarged Shadow Creep. Build Dai-Oh equips the Tank Ressha to become Build Dai-Oh Tank while ToQ-Oh equips the Build Ressha to become ToQ-Oh Build to finish their opponent off. Later, Tokatti explains to Mio that Ryo Knight is modeled after his older brother and the two have moment before their friends start the fireworks celebration. Elsewhere, as Madame Noir learns that Miss Glitta is still alive within Emperor Z, General Schwarz is revealed to have survived his fall into the river as he finds his Kurainer still intact. 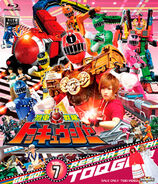 Retrieved from "https://powerrangers.fandom.com/wiki/Station_25:_Right_Out_of_a_Fairy_Tale?oldid=887974"
Community content is available under CC-BY-SA unless otherwise noted.