To find their hometown Subarugahama, the ToQgers must move the Ressha onto the Shadow Line to free it from the darkness engulfing it, but the shadows engulfing the junction point keeps them from using their powers

The ToQgers search the records for their hometown of Subarugahama, ignoring the pleas of Wagon, only to come up empty as if the town never existed. Ticket reveals that this is the result of being completely enveloped by the Shadow Line's darkness; the town around a Dark Station separated from the Rainbow Line and made a part of the Shadow Line as a Shadow Town. However, Akira reveals that there is a way onto the Shadow Line as he takes them to a junction line linking the Rainbow Line and Shadow Line railways and loans them his Drill Ressha, as it was previously a Kurainer. The group arrives in the Shadow Town of Ugokenai, where they encounter Ugokenai's Keeper Rook. They prepare to fight him, but they find that they are unable to maintain their transformation for more than 30 seconds at a time, forcing them into hiding. Eventually, the group comes up with a plan to let one of them deal with Keeper Rook while the others hold off the Close, before only Right is left to face the Keeper while using Transfer Changes to prolong his transformation and a Shogi variation of the Rainbow Rush to finish Keeper Rook off. Outside the Shadow Line, Akira is confronted by Barone Nero until Ugokenai and an enlarged Rook manifest back into normal space. Keeper Rook then proceeds to absorb Close from his spear to increase his size to overpower Cho ToQ Oh and Build Dai-Oh before they combine into Cho Cho ToQ Dai-Oh to destroy Keeper Rook's spear and then Keeper Rook himself. With the town restored, the main ToQgers decide to save the towns taken by the Shadow Line as Akira leaves to find the next junction point.

ToQ 1gou Blue
Add a photo to this gallery 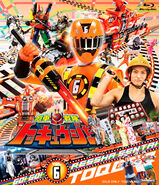 ToQger Volume 6, Blu-ray cover
Add a photo to this gallery

Retrieved from "https://powerrangers.fandom.com/wiki/Station_24:_Pass_the_Junction?oldid=887973"
Community content is available under CC-BY-SA unless otherwise noted.