Jack-in-the-Box Shadow's ability to send people flying away from him if they laugh affects all the ToQgers except Akira, leading the others to help Akira find his sense of humor or else he may be killed.

On the Ressha, with Ticket utterly livid over what Akira has done to the Build Ressha, the topic of Akira never smiling comes up as they attempt to get him to laugh. But after Akira explains that he will smile once he has died, the ToQgers are alerted to the presence of Ōwarai Dark Station where those who laugh are sent flying through the power of the Shadow Creep Jack-in-the-Box Shadow. After fighting the Close, the main ToQgers are taken out by their laughter while ToQ 6gou drives Jack-in-the-Box Shadow off. On the Ressha, the main ToQgers undergo strange comedy training to give Jack-in-the-Box Shadow a taste of his own medicine. Though they think they are ready, the ToQgers' training is shown to be fruitless as Akira arrives, playing a recorder instead of his missing harmonica that makes all parties laugh. ToQ 6gou then proceeds to defeat the Close with the other ToQgers' assistance while an upset ToQ 1gou sits the fight out. After ToQ 6gou defeats Jack-in-the-Box Shadow, he summons the Build Ressha while the others form ToQ-Oh and Diesel-Oh. But as ToQ 6gou forms Build Dai-Oh, he begins to laugh uncontrollably throughout the fight until the Ressha combinations destroy Jack-in-the-Box Shadow and his Kurainer support. It is at this time that they discover that Akira is being tickled by a kitten he borrowed from a little girl who was unable to keep it, which the main ToQgers notice has made him smile. When Akira is forced to give the cat back to the little girl, regaining his harmonica in the process, he sobs over the loss before reverting to his usual moody self. Meanwhile, at Castle Terminal, Madame Noir has made the finishing touches on Miss Glitta's wedding dress, with Baron Nero feeling that Noir has an ulterior motive through her daughter.

ToQ 2gou Red
Add a photo to this gallery 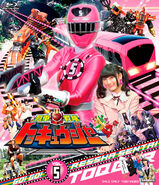 ToQger Volume 5, Blu-ray cover
Add a photo to this gallery

Retrieved from "https://powerrangers.fandom.com/wiki/Station_20:_Smiling_Is_Dangerous?oldid=823433"
Community content is available under CC-BY-SA unless otherwise noted.