Run Fire Extinguisher (走れ消火器, Hashire Shōkaki) is the thirteenth episode of Ressha Sentai ToQger. It marks the debut of the Fire Ressha and the Diesel-Oh Fire combination.

A series of attacks from Kuliner Robos leaves the main Ressha in dire need of repairs, once again leaving the Support Ressha and Diesel-Oh all that the ToQgers can use. The Conductor warns them that they must find other Support Ressha in order to bolster the powers of Cho ToQ-Oh. While Right and Mio are out searching, Loupe Shadow appears, and throws Mio into a powerful rage.

The overuse of Cho ToQ Oh during a series of attacks from Kurainer Robos leaves the Ressha in dire need of repairs as it and the Support Ressha need to be reinforced to deal with the stress of the combination. The Conductor also explains that the faint signal of a Support Ressha has been detected at the station they have stopped by. While they search, Mio is bothered by Right's habit of putting food before their mission, prior to finding a Shadow Creep having Kuros paint the area black. After the Shadow Creep introduces himself as Loupe Shadow, the ToQgers fight the Kuros before Loupe Shadow runs off. As Right goes off on his own with Kagura following him, Mio is livid over Right's bad habit before she, Tokatti, and Hikari learn that Loupe Shadow's plan is to burn the city with his magnifying glass once its is all painted black. Mio calls Right to help find Loupe Shadow, but he tells her that he has confidence in her to get it done as he focuses on the giant fire extinguisher he and have Kagura found. Though the three ToQgers are too late to stop Loupe Shadow from setting the city on fire, Mio understands Right's trust from a past memory before she, ToQ 2gou, and ToQ 4gou fight Loupe Shadow. By that time, Right activates the Fire Ressha to put out the fires. After being defeated by the three ToQgers, Loupe Shadow enlarges as he sets the nearby forest on fire. The group forms Diesel-Oh and the ToQgers combine it with the Fire Ressha to form Diesel-Oh Fire to put out the fire before finishing Loupe Shadow with the Fire Splash. Later, Mio admits that she was wrong about Right until he arrives with snacks he brought from the city. 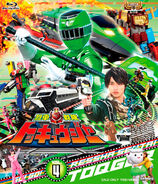