Station 11: The Emperor of Darkness

Station 11: The Emperor of Darkness

While the ToQgers enjoy a day out at an amusement park, Right meets a young man with balloons who seems odd. Baron Nero leads an offensive against them in order to welcome the Emperor of Darkness onto the Shadow Line, and also has a particular interest in the man with the balloons.

At the Castle Terminal, confronted by Madame Noir over General Schwarz being sent to retrieve their leader, Baron Nero explains that the darkness he has acquired at the cost of his followers has allowed him to open railway to the Emperor of Darkness. But when General Scwharz returns to the terminal where Nero has assembled a welcoming ceremony, only the Emperor's bodyguard Lamp Shadow emerges with their leader revealed to have left the train midway to find some fun. Meanwhile, the ToQgers are excited to find they are to have a stop at the Yumenohoshi-yūenchimae Station, right in front of an amusement park. While the ToQgers enjoy their day at the amusement park, Right meets a strange young man with balloons who has an obsession for shiny things. But Right eventually realizes there is something wrong about the young man as he finds him odd. Before the young man can introduce himself, two Kurainers arrive with the Shadow Line's leading figures surrounding him. After General Scwharz introduces Baron Nero and Madame Noir to them, the young man introduces himself as the Shadow Line's leader Z, the Emperor of Darkness. The ToQgers transform to fight the Close that have accompanied him before General Scwharz, Madame Noir, and Baron Nero overpower them. But Emperor Z stops his followers from killing the defeated ToQgers as he reveals he does want such such light to be extinguished before realizing the five have been consumed in darkness. Before he can explain, Emperor Z's body begins to fail from being in the light for too long as the Shadow Line falls back, save a fearful Glitta. The ToQgers pursue the Kurainers on the Ressha, only to be halted by three Kurainer Robos which ToQ-Oh and Diesel-Oh destroy with the Double Ressha Super Combination attack. But as the ToQgers are about to leave for the next station, Lamp Shadow acts on Emperor Z's orders to test the ToQgers' light by using an ability that renders Tokatti, Mio, Hikari, and Kagura unable to see the Ressha and seemingly devoid of their Imagination. 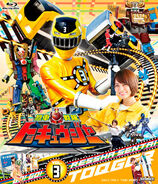