When the evil Shadow Line begins to use their evil train the Kleiner to kidnap children, a young man named Right is amongst those nearly captured. He then sees the prismatic Rainbow Line and its Ressha trains appear, along with four of the ToQgers, inspiring him to help protect the children with them.

Children with strong imagination are being kidnapped by the Shadow Kaijin Bag Shadow and taken aboard the Shadow Line's evil train the "Kleiner". Much to the monster's surprise, among the captives is a sleeping young man.

The young man awakens and introduces himself as Right. He is harassed by Bag Shadow until the prismatic Rainbow Line and its Ressha trains appear, along with four heroes who call themselves the "ToQgers". The ToQgers fight the monster and his army of Kuros, but are forced to flee when Right steps into the battle and is knocked out by Bag Shadow.

Right later awakens inside the Ressha and recognizes the ToQgers as his childhood friends: Tokatti, Mio, Hikari, and Kagura. He is greeted by an enigmatic person called the Conductor and his sidekick Ticket who inform him that because of their high imaginations, they were chosen by the Rainbow Line to become the ToQgers in order to stop the Shadow Line's plans to envelop the world in darkness. Soon after, the Kleiner is spotted again and Right is the first to jump into action, not even giving time for his friends to give him his ToQ Changer. When his friends catch up to him and after he takes a beating, Right uses his Imagination to deal a powerful punch to Bag Shadow even without transforming. After rescuing the children, all five ToQgers fight together for the first time.

During the battle, Right learns that they can switch their powers and weapons between themselves and they make use of it to confound their enemies (though they were also confusing themselves), alternating their attacks randomly and defeating all the Kuros until the Conductor forcibly undoes the switches, claiming that such an ability must be only used in emergencies. The ToQgers then finish the monster with the Renketsu Bazooka, but it later enlarges itself with the power of darkness, prompting the Conductor to switch control of the Ressha temporarily for the ToQgers to form the giant robot ToQ-Oh, using it to destroy Bag Shadow for good with the Fumikiriken Ressha Flash.

Back from their first victory, Right and his friends are astonished when Ticket lets slip that the main reason for them being chosen to become the ToQgers is because they are as good as dead. 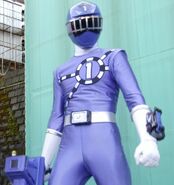 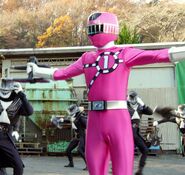 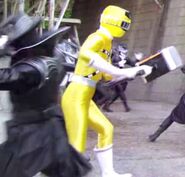 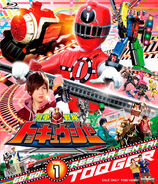 ToQger Volume 1, Blu-ray cover
Add a photo to this gallery

Retrieved from "https://powerrangers.fandom.com/wiki/Starting_Station:_Let%27s_Ride_the_Limited_Express_Train?oldid=860169"
Community content is available under CC-BY-SA unless otherwise noted.