"Because this is the title of the movie. The End of the Timerangers!"
―Spiritual Filmmaker Glokun's first words before transforming.[src]

A director armed with a megaphone. In Sion's dream, the Timerangers were visited by producer, Junichi Machida, who gave the team a job to investigate the strange happenings occurring at the new Tokyo Ninja Story movie. Once the film's new title was revealed, "The End of the Timerangers," Glokun revealed himself and used his directing powers to place the gang in various genres from yakuza, to kung-fu, and then sci-fi. Glokun even managed to release some of the criminals arrested by the Timerangers for the big fight scene. When Domon offended him, Glokun decides to forward to the climax, enlarging himself as he placed the Timerangers in Shadow Beta before writing in Naoto, V-Rex, and even Providus. The Timerangers' attacks were ineffective against Glokun, as his movie magic made him "invincible". When Shadow Beta made a hit, it turned out the last page of Glokun's was gone - as Sion used it to gain Shogo Ogata's autograph, thus saving the gang. With Glokun horrified that he had no ending to his film, the Timerangers aimed to create it - bringing in Glokun with the power of all the robots. 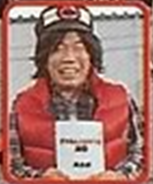