Space.1: The Super Stars of Space

Space.1: The Super Stars of Space (宇宙一のスーパスター, Uchuichi no Supā Sutā) is the first episode of Uchu Sentai Kyuranger. It is the start of the series, introduces 6 of the 9 main characters and Balance and Naga Ray make brief appearances.

This episode broadcast was accompanied by web broadcast of the first installment of Transformation Lessons ~Let's Star Change Together!~

88 constellations that exist in the universe have fallen into the hands of the evil Space Shogunate Jark Matter. However, the insurrection army Rebellion and three Kyurangers chosen by the Kyutama are opposing them to protect the people.

By an accident, an adventurer traveling through space, Lucky witnesses Chameleon Green, Oushi Black, and Kajiki Yellow fighting on the planet Crotus. Lucky decides to become the 4th Kyuranger and they set out to planet Jagjag to search for the Kyutama.

The evil organization Jark Matter has succeeded in conquering Earth, which later is revealed that they have control over the entire universe itself. Their next target was Planet Crotos, where they launch an all-out attack on the inhabitants of the planet. However, hope is not lost, as heroes arrive to fight Jark Matter, the Kyurangers. Hammy, Spada, and Champ arrived and transformed into Chameleon Green, Kajiki Yellow, and Oushi Black respectively to fight the evil forces that have invaded the planet.

Aboard the Rangers' ship, the Orion, Raptor 283 reminds them that their mission is to secure the civilians. They should not take any huge risks as all nine of them have not been assembled yet.

Meanwhile deep in space, a young man travels. He experiences a meteor shower and his ship crash-lands onto Planet Crotos, right in the middle of a fight. Miraculously, he survives and declares himself to be extremely lucky. Unbeknownst to him, the Rangers were actually cornered and he opened up a path to safety for them.

On board the ship, the young man introduced himself as "Lucky", and the others begin to say he was also very "lucky." Raptor appears and confirms that she fixed Lucky's spaceship. According to Hammy, Lucky is from the planet Luth and wanted to travel around the universe. The others fill Lucky in on Jark Matter's plans and their resistance against them. Sympathizing with them, he declares that he wants to be a Kyuranger.

Meanwhile, on the Jark Matter spaceship, Eridron has contacted his master Don Almage about the appearance of the Kyurangers, and assures him that the Kyurangers will be eliminated.

Lucky heads to Planet Jagujagu, where he hopes to find a Kyutama. While flying inside the atmosphere, his ship malfunctions and crash lands, causing an explosion. He is caught by a wolfman named Garu (who is in possession of a Kyutama), and relentlessly attacked by him. The other Kyurangers arrive to stop the wolfman from attacking Lucky. After realizing the wolfman has a Kyutama, they bring him back to his own residence and encourage him to "activate" it, but to no avail. He reveals that no one can defeat Jark Matter, causing Lucky to berate him for the Kyutama to not choose him. Lucky proceeds to call him a coward, and the two begin fighting again.

Garu says Lucky shouldn't fight if he was weak. Lucky tells him that he should fight because he's strong. Garu says he did, for his clan, but they were all wiped out. Lucky continues throwing punches, channeling his strength from his will to fight. Suddenly, Jark Matter forces enter the planet and begin their conquering. Lucky fights even without Kyuranger powers, but is thrown into space and left to die. Determined to live and save the universe, his body glows and is given possession of the Shishi Kyutama. He rides a meteor shower back onto the planet and transforms into Shishi Red. He reveals his weapon and begins fighting, with the others following suit.

On the planet, Garu finally finds his resolve to fight and transforms into Ookami Blue and joins Oushi Black in battle. They defeat the ground forces and summon their Voyagers. They join the other three in space and form the KyurenOh to fight Eridron and defeat him.

On the Orion, Lucky and Garu formally join the team and begin their journey to find the rest of the Kyurangers.

On the Planet Jagama, two thieves have begun to be aware of the Kyurangers. 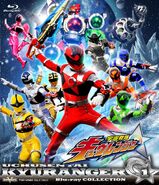 Kyuranger Collection 1, Blu-ray
Add a photo to this gallery

Retrieved from "https://powerrangers.fandom.com/wiki/Space.1:_The_Super_Stars_of_Space?oldid=824562"
Community content is available under CC-BY-SA unless otherwise noted.