RangerWiki
Register
Don't have an account?
Sign In
Advertisement
in: Zyuden Sentai Kyoryuger, Articles in need of major additions, Sentai Ranger,
and 8 more

A 16-year-old High School student. A cool-headed swordsman with swift attacks, he declares himself the “Slashing Brave” (斬撃の勇者, Zangeki no Yūsha). He is descended from the Rippukan Family, a clan who has been practicing the assassination sword style "Peerless Sword" (無双剣, Musōken) since the Sengoku Period.

As a form of defiance to his father, Souji defeated the Zyudenryu Zakutor in a bamboo thicket to become Kyoryu Green and soon developed a more feral fighting style, adopting a backhand grip which later became his personal sword style, "Peerless Slashing Sword" (斬撃無双剣, Zangeki Musōken). Though distant at first, Souji eventually joins the team when Daigo resolves things between him and his father.

His mother, on the other hand, tries to complicate things by taking Souji away from the team, but finally changes her mind after hearing a few words from Torin (in human form).

TV STORY-Brave 43: The Blade of the Soul! Roar, Streizer. Although she claims she hasn't given up on Souji, she never makes another attempt.

Torin also hands his sword Feather Edge to Souji, believing that "youth holds the greatest potential" as Souji is the youngest member (this could, however, also be because Souji was Torin's personal student).

A Zorima was disguised as Kyoryu Green by Debo Yakigonte as part of a plot to break the Kyoryugers up, by panning Kyoryu Blue's old man jokes.

Souji appears with his teammates and helps deal with Waredonaier and his Gormin/Sugormin army.[1]

Souji and his teammates are reacquainted with the Go-Busters and later fight alongside the Abarangers and Zyurangers against Space War God Voldos and his army.

In Zyuden Sentai Kyoryuger Returns: 100 YEARS AFTER, Souji is still alive at 116 years old owing to advances in medicine. He was seen with Icchan, Uppi and great-grandson Soujiro when they quit being Kyoryugers and told them to search their hearts for their right colors. When Remorseful Knight Arslevan erased the memories of the Kyoryugers from the public, Souji`s memories also faded but returned when he and Soujiro sparred and Soujiro won. At this point he also passed Feather Edge on to Soujiro, commenting on how both of them were hesitant to practice swordsmanship as teenagers. In the events before the future Kyoryugers were born, it's shown that Souji married Rin Katsuyama.

Souji's 2014 self and the other Kyoryugers were summoned by the SP Zyudenchi to help their descendants defeat Remorseful Knight Arslevan. Afterwards, he realizes he missed a meeting with Rin, who soundly beats him over the head.

The Kyoryugers return to fight alongside the ToQgers in Ressha Sentai ToQger vs. Kyoryuger: The Movie. Souji primarily fights alongside ToQ 4gou, and comments on how shy the two of them are.

Kyoryu Green appeared with his team among the first 38 Super Sentai whom collectively empowered Wild Tousai Shuriken King in its fight against the titanic Gillmarda, granting the Ninningers and Zyuohgers the power to perform the Zyuoh Ninnin Super Sentai Burst which destroyed Gillmarda with the combined power of all 40 Super Sentai.

Souji is a cold, cool, and calm high-school student and a member of Rippukan House. Souji wishes that he was the swordsman of the team, a status that is most jeopardized by Utsusemimaru and Torin. Souji also practices with his father to improve his swordsmanship. Eventually, he develops his own style called "Peerless Slashing Sword", which borrows techniques from Peerless Sword, Utsusemimaru's lightning style, and Torin's Trinity Straizer.

He's also painfully oblivious to love, much to the ire of Rin.

Armed On (アームドオン, Āmudo On) is Kyoryu Green's extension form accessed by using two copies of the Zakutor Zyudenchi in his Gaburivolver. Sporting spiky silver armor across his right arm, Armed On gives Kyoryu Green access to his Zyuden Arms weapon, the Zakutor Slasher.

As Kyoryu Green, his suit actor is Kosuke Asai (浅井 宏輔, Asai Kōsuke), who was previously the suit actor for Cheeda Nick in Tokumei Sentai Go-Busters and would later serve as suit actor for ToQ 6gou in Ressha Sentai ToQger. 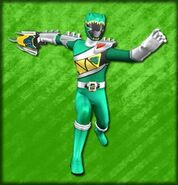 Kyoryu Green appears with his team in the Nintendo 3DS Zyuden Sentai Kyoryuger: Game on Gaburincho.

Kyoryu Green is among the vast pantheon of Rangers which are available in the mobile game Super Sentai Battle Base.

Kyoryu Green appears with his team among all Sentai in the mobile game Super Sentai Legend Wars.