Possessing a sunny disposition, he was referred to by his racing team as "Miracle Esumi" for his belief in miracles. Unyielding to the point of obstinance and always full of confidence, he confronts all obstacles without hesitation. He is often seen flipping a Go-Onger coin for good luck. When Engine Speedor becomes rusted, Sōsuke crosses paths with his former mentor, who aids him by reminding him that a miracle takes more than one person to make by himself. He is very protective of his teammates; when Saki Rouyama expresses that she wants to be pretty for a boyfriend who will appreciate her and makes a date with a young musician not long after, Sōsuke worries that she intends to leave the team to get married.

Encountering the Gekiranger, the Go-Ongers lose the Engine Souls to the Gaiark and Meka. With Jan Kandou's help, Sōsuke manages to gain Geki. With Engine-Ken, a new type of Geki fighting fist, he was able to access his beast spirit (which turned out to be Speedor). With this he performs GekiSpeedor Saber Straight (with Road Saber) and the Doru Doru Dan (with the Mantan Gun).

Sōsuke is thought to secretly like Miu Sutou. While under the influence of a Barbaric Machine Clan Gaiark energy drink, he gives her a ring.

TV STORY-GP 30: Punch of Friendship However, when the other Go-Ongers subtly tell Sosuke that Miu is attracted to helpless men and that Sosuke is one of them, he is shocked to hear this.

TV STORY-GP 42: Campus Secret After the final battle, Sōsuke returns to racing, but because of his long absence from the racing circuit, he has to start from the bottom as a go-kart driver.

Go-On Red and Shinken Red draw their swords (Road Saber and Rekka Daizantou) and their swords clash, producing a cloud of red smoke. Go-On Red wishes Shinken Red luck, and both Rangers turn their attention toward the viewers. This is the only hand-off thus far where both Reds are not in the "black room" and are interacting in the real world. (In the Magiranger/Boukenger hand-off, only MagiRed was in the real world)

Takeru Shiba was fighting with Sousuke Esumi to save Bomper and Ji. Additionally, Sosuke borrows the Kyoryu Disk to become Hyper Go-On Red.

Over a year later, Sosuke fought alongside not only his own team, but every single Sentai ranger in existence, against the Empire of Zangyack when it attacked the Earth in the Great Legend War. After fighting against hundreds of Gormin and their Zgormin commanders. Akarenger noticed the fleet moving towards them, he gathered all the Rangers together and gave them the order to sacrifice their powers to wipe out the first invasion's armada.

Sosuke returned in Gokaiger to assist the Gokaigers when BOMPER requests to be taken to him after appearing on the Gokai Galleon. After he is told of the situation in the Gunman World, and the Gokaigers refuse to help, Sosuke dons on his Go-Onger uniform for one last time. Using a trampoline and pole, Sosuke tried to get through the dimensional portal that leads there by himself, to no avail, until the Gokaigers changed their minds and let him go aboard the Gokai Galleon. Despite having lost his powers as Go-On Red, Sōsuke still manages to hold his own against a troop of Ugatz. During this situation, he finds out his partner, Engine Speedor and Engine Bearrv had gotten married and was surprised to find out that they also had a son.

TV STORY-Ep. 35: Dimension on the Other Side

However, even though the crisis in the Gunman World had been averted with Barbaric Officer Chirakashizky's defeat, there was still Pollution President Babatcheed to deal with but, since he closed off the portal back to the Human World and the available Engines had not enough power to break through, they had to head to Machine World to convince Speedor and Bear RV's son, Machalcon, to help them. Despite Sosuke's emotional pleas, Machalcon refused to stop and was only tamed when Gokai-Oh (without its legs) forced itself on him. After having helped the Gokaigers fully conquer the Go-Onger's Greater Power (previously conceded to them by Saki) and defeat Babatcheed, Sosuke parts ways with the pirates, going back to being an auto racer.

After the Gokaigers defeated the Zangyack, Miu got her powers back, it is assumed Sosuke and his team have their powers back as well.

In the second episode of Hikonin Sentai Akibaranger, when the Akibarangers drive Machine Itashar, Nobuo Akagi (AkibaRed) says that they're going to the scene at Mach Speed, a reference to Sosuke's catchphrase.

Sosuke, alongside his team (the Go-On Wings were absent), among the majority of the Super Sentai heroes, was caught up in the "Super Hero Taisen" incident which eventually resulted in the Super Sentai teams and Kamen Riders joining forces to defeat both Dai-Zangyack and Dai-Shocker. During the final battle, he is seen in the background fighting Go-Jaaza-Gi. He and the other Go-Ongers later teamed up with Kiva to destroy each otherss past enemies.

Go-On Red appeared as part of a conference of the first 38 Reds led by Red Falcon, whom addressed the Ninningers and Zyuohgers as the greater Super Sentai pantheon intervened to save them from defeat at the hands of the titanic Gillmarda. Empowering the Combination Nin Shuriken to form Wild Tousai Shuriken King, the first 38 Super Sentai further imbued their successors with the power to perform the Zyuoh Ninnin Super Sentai Burst, destroying Gillmarda with the combined power of all 40 Super Sentai.

Sosuke joined the Super Sentai Strongest Battle as a member of Vehicle Team. In the second round, Sosuke and Bouken Silver fought AkaNinger and Sasori Orange of Oddball Team. Although his duo was having the upper hand in the fight, Sosuke and Eiji accidentally crashed into each other and were knocked out of transformation. While they were busy arguing, Oddball Team was able to grab the gem and win the battle. Disappointed, Sosuke told his successors to continue to race down the road of justice, before disappearing.

TV STORY-Battle1: Who is the Strongest in History!?

Sosuke alongside with his Sentai Red Ranger predecessors appeared to help the Zenkaigers.

During the climatic final battle itself, he can be seen fighting alongside Red Racer, Kamen Rider Drive and Kamen Rider Sabela.

The Go-On Red Ranger Key (ゴーオンレッドレンジャーキー, Gōon Reddo Renjā Kī) is Sosuke Esumi's personal Ranger Key and what became of his powers after he along with the rest of the 34 Super Sentai sacrificed their powers to end the Great Legend War.

This key along with the majority of the Ranger Keys were collected by the Red Pirates and later used by the Gokaigers. The Go-On Red Ranger Key was mainly used by Captain Marvelous (Gokai Red), who used it to fight as Go-On Red. It was also used by Gai Ikari on two occasions.

After Zangyack were finally defeated, the Gokaigers gave the Ranger Keys back to their rightful owners. It is presumed that Sosuke received his key and became Go-On Red once more.

A female version of Go-On Red as seen in a Gokaiger stageshow.

A Go-Onger Zyudenchi which bears the likeness of Go-On Red is part of the Legend Sentai Zyudenchi toyline which can be used in Super Sentai Battle: Dice-O.

The Go-Onger Ressha (ゴーオンジャーレッシャー, Gōonjā Ressha) - The Ressha associated with the Go-Ongers, based off of Go-On Red's Engine Speedor; when replacing Red Ressha in ToQ-Oh, it forms ToQ-Oh Engine-O. Also appears as an SG Ressha.

"Baban! Baban! Baban! Baban! Ba-Ba-Ba-Ban! Go-Onger!"
―Past Sentai ability announcement
The Go-Onger Gear (ゴーオンジャーギア, Gōonjā Gia) is one of many Sentai Gears used by the Zenkaigers to battle the Kikaitopia Dynasty Tojitendo. For Twokaizer, it grants his and another's weapons the Mission Six state of the Rocket Daggers, granting flight while being able to attack. 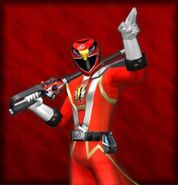 Go-On Red is among the vast pantheon of Rangers which are avaliable in the mobile game Super Sentai Battle Base, with his Hyper Go-On Red form also being avaliable, as well as a Go-On Red Santa version.

Go-On Red appears with his team among all Sentai in the mobile game Super Sentai Legend Wars.