"Greetings, all. I am Slyther, a master of illusion."
―Slyther's first words upon being activated.[src]

"Fine, you caught me. I'm really *changes back into his real form* Slyther. Hold for applause."
―Slyther revealing himself to Zayto.[src]
"Oh dear...."
―Slyther's catchphrase.[src]

Slyther is a robotic bishop/ringmaster-based general in Power Rangers Dino Fury, Void Knight's third general, his new second-in-command following Boomtower's demise, and one of the secondary antagonists of the show.

Slyther is created by Void Knight and Mucus, with the latter placing the data on the Rangers and their base into the new robot whilst the former installs a Sporix into him to help him grow giant, having learned from Boomtower that a robot installed with a Sporix can enlarge. When he is activated, his first words are a direct introduction and demonstration of his powers. He appears to be jovial but doesn't care about Mucus being his creator or her request to be friends but he is interested in helping Void Knight with a plan to use his illusion abilities to fool the Rangers so he can steal their Sporix. From there, Slyther sneaks over to Dinohenge, overseeing Zayto and Solon creating an intercom to communicate with Rafkon, which Slyther planned to take advantage of. He later returned to the same place, having transformed into a Rafkonian woman named Arla and met the Rangers, Zayto especially being happy that someone from his world did manage to hear the message. Pretending to have Zayto's abilities to gain their trust, the robot was let into the base, with the intent of stealing the Sporix. However, Solon did not allow it and after everyone left the room, Slyther changes back into his true form and contacts Void Knight, informing him and Mucus that he has entered the base.

Slyther is discovered by Solon and they have a confrontation but Solon is defeated and Slyther returns to the base to steal the Sporix. Thankfully, Zayto figures out something is wrong and stops him before he can obtain the Sporix. In the ensuing fight, Slyther tries to destroy Zayto but he is saved by the Rangers and Zayto manages to defeat the robotic general. However, Slyther transforms into a giant Roostafa but is defeated by the Dino Fury Megazord Warrior Formation's Mega Blast. Although Slyther survives, he ends up being electrocuted over a set of power lines which frys his memories completely. However, Mucus is able to locate him and, after using his amnesia to convince him to be her friend, they return to Area 62.

At some point, Slyther gets his memory back for he and Mucus manage to find Fogshell who they recruit, only for the three of them to be discovered by Javi and Izzy in Evergreen Park. He sees them there and shows the new Sporix Beast how he deals with Rangers before blasting them with his staff. In addition, he finds an unhatched Sporix and delivers it to Void Knight.

Sometimes later, Slyther disguises himself as a human athlete but, upon hearing the Rangers' conversation, he heads to a safe spot to change back into his real form and calls Void Knight to discuss a plan that requires Fogshell's help. Slyther kidnaps Adrian to blackmail the Rangers into giving him all their Sporix in exchange for their friend. The Rangers give him their Sporix and free Adrian. Slyther takes their Sporix and sends Fogshell to fight them. The Rangers defeat Fogshell and Slyther tried to retrieve the monster's Sporix, but the Rangers catch it first, forcing him to flee. When he decided to do surprise Void Knight with what he got, the chest containing all the Sporix the Rangers collected so far disappeared. Void Knight suddenly realizes that it was an illusion and the Rangers tricked his generals. He becomes angry and punishes them both.

When a mysterious cloaked figure invades Area 62 to get the Sporix, Slyther confronts them alongside Void Knight and Mucus. However, the figure reveals himself to be Lord Zedd who easily defeats Slyther and Void Knight although his master Reaghoul then stops him to form an alliance.

Slyther disguises himself as Mr. Wiz to lure the Rangers into a trap and sends Tidemare to destroy them but he flees with Mucus when Aiyon the Gold Ranger awakens and defeats Tidemare soon after.

After Mucus finds Trawler, they teleport to Area 62. Slyther and his comrades watch the BuzzBlast news showing the Gold Ranger won by the popularity. After Void Knight imagines a plan, Slyther disguises once more as a human to trick the Gold Ranger into calling his Zord for his fans. Soon after the Mosa Razor Zord's arrival, Trawler captures it. Void Knight rejoins Slyther and asks him if it is the same Zord that destroyed Wreckmate, which the general confirms. He tells his plan to his master: hypnotize the Mosa Razor Zord so it would only obey Void Knight and destroy the Rangers under his command. After Void Knight's departure, Slyther tries to hypnotize the Mosa Razor Zord, but Javi turns invisible using the Invisi Dino Key and destroys the Hengemen, allowing Aiyon to stop the hypnosis. The Mosa Razor Zord combines with the Dimetro Blazing Zord to form the Electro Zord who attacks Slyther, prompting the general to flee.

Slyther and Mucus encounter Boneswitch, who has the power to swap bodies. When they reach Area 62, the two generals show Void Knight the Beast's abilities and he does a test by swapping their bodies. Returning to their normal bodies, a disgusted Slyther retires to take a shower.

On Void Knight's orders, Slyther releases Reaghoul who resurrects Boomtower to fight the Rangers. When Boomtower asks his master to give him a Sporix so he can enlarge, he refuses by saying he doesn't have any to spare. But at this moment, Mucus remarks to Slyther that he never used his Sporix so he can to give it Boomtower. Void Knight agrees and orders two Hengemen to restrain Slyther while Boomtower takes his Sporix. Slyther says that it is just a loan.

Mucus and Slyther manage to escape the Dark Dimension through unknown means and plan to avenge Void Knight by destroying the Rangers. Slyther steals Santa's Magic Sketchbook to create the Spider Sketch Monster and then a clone of him but both creations are destroyed by the Rangers. After their failure, Mucus and Slyther flee to Area 62.

Slyther and Mucus try to break into Void Knight secret room with a wrecking ball but this fails due to the door's strength. After Slyther is forced to reform Mucus (much to thier disgust), Void Knight (having survived his apparent death) contacts them them via a screen. When asking if that's the real Void Knight, Bitscreem teleports in and threatens to destroy them if they dare to question Void Knight again. Slyther and Bitscreem are later able to steal the Fix-it Key from the Ranger when he poses as a flower trolly owner and has Javi fix it with said Key only for Bitscreem to steal it. Later, Slyther and Mucus work as a distraction so that Bitscreem can steal back the Void Knight Saber.

Mucus is horrified at the arrival of a seaweed creature at Area 62 but Slyther reassures her that it is just a Sporix Beast. However the being discards the seaweed, revealing himself to be none other than Wreckmate, who survived his previous Megazord battle and has returned to serve Void Knight. Although surprised at his creation’s return, Slyther is disgusted by his sea shanty and tells him to leave which leads to an argument and nearly a fight. Before they can brawl, Void Knight insists that they fight the Power Rangers and they agree to a contest where whoever kills the least Rangers has to leave forever. Slyther unveils a potion that will supercharge the drinker’s abilities for several minutes but Wreckmate snatches and drinks it instead before throwing Slyther across the room. Recovering, the two of them teleport away to attack the Rangers with Mucus helping. Upon arriving, they split up with Slyther and Mucus going to the downtown over-bridge so the Rangers split-up with Aiyon, Izzy and Javi going to fight Slyther. They morph and take Mucus out of the fight with a Mosa Blast so Slyther fights alone but is overwhelmed so he summons Hengemen and retreats until the three-retreat due Wreckmate’s intervention. Slyther then emerges to bicker with Wreckmate before they both withdraw.

After Occulo arrives in Area 62 and reveals his omni-directional vision and x-ray vision, Slyther reveals that he found an amulet that can erase memories in the base’s basement. The plan is that this will allow them to steal Sporix without the Rangers remembering where they were. He first uses it in an encounter with the Dino Fury Rangers and then returns a day later with Occulo and Mucus to collect more Sporix. Though they encounter the Rangers, he uses the amulet on them to make them think that they found a pickle before withdrawing. When they return later that day, Slyther learns that they have all of the Sporix in Pine Ridge before the Rangers arrive so he summons Hengemen., Once Occulo takes them down, Slyther uses the amulet to make them think that they found a giant teddy bear but Zayto (having previously been absent to look for Rafkon arrives on the Dino Fury Cycle. With it, he hits Slyther with Plasms Blasts until he tosses the amulet and destroys it which restores the Rangers. Angry, Slyther charges but Zayto uses the Light Key to take the general down and free his friends so the villainous trio send more Hengemen and retreat.

Slyther is very deceptive, being able to fool Zayto by pretending to be a Knight of Rafkon. He is also very dramatic and showy, loudly announcing his attacks while battling the Rangers, and introducing himself like an announcer introducing a stage act. He also has a habit of reviewing his opponents and their attacks as if critiquing a stage performance. At first, he didn't seem to care that Mucus had created him and brushed her aside, making fun of her for wanting him as a friend while appearing to be loyal to Void Knight and faking to give Mucus a high five to embarrass her. After he was defeated as Roostafa and fell into some power lines, he appeared to have amnesia and due to this, Mucus tricked him into being her friend to which he gladly accepted, possibly meaning he has a much more caring side now following his memory loss. Out of all of Void Knight's generals, Slyther is the smartest one, coming up with brilliant plans like using Ollie's desire for a new laptop to give him a hacked one so he could steal the data to find what was causing the storm or hacking into the Ranger Hotline to intercept Sporix Beast reports to catch Sporix before the Rangers which succeeded as he managed to steal one and recruit Fogshell before his plan was foiled. He is very loyal to Void Knight and upon learning his master was presumably destroyed by the Rangers, he planned to avenge him by destroying them.

Men in the Trench Coat

Slyther as an Athlete 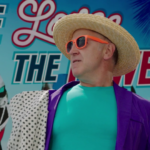 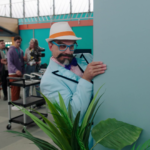