Sion (シオン, Shion) is TimeGreen (タイムグリーン, Taimu Gurīn) of the Timerangers. A 17 year old (28 as for the Great Legend War in Gokaiger) Hummardian from the planet Hummard. His planet was destroyed as the result of war and was thus he was raised on Earth in a laboratory, a subject of experiments.

He is nimble and is curious of everything around him. Sion is also fond of dyeing his hair, which he does every so often since age 3.

Due to his alien physiology, Sion only needs to sleep once per year, but it takes him a week of hibernation when he does it. He is also the Timerangers' technical expert able to work with any machine. Sion is in charge of computer repairs for Tomorrow Research.

He is (currently) the youngest Ranger to exist being born around 2983. In the finale Sion learns that because Hummard had no contact with Earth prior to its destruction, his own history hadn't changed.

A copy of TimeGreen was part of a Copy Timeranger team that fought the Timerangers in a pocket dimension.

TimeGreen is among the Sentai warriors seen in clips when Yuusuke Amamiya (Red Falcon) lectured Gaku Washio (GaoYellow) about the past Sentai sword experts, showing him that the true sword wasn't the sharpest, but the one that feeds on courage.

Years later, Sion fought alongside not only his own team, but every single Sentai ranger in existence, against the Empire of Zangyack when it attacked the Earth in the Great Legend War. After fighting against hundreds of Gormin and their Zgormin commanders. Akarenger noticed the fleet moving towards them, he gathered all the Rangers together and gave them the order to sacrifice their powers to wipe out the first invasion's armada. The TimeGreen powers are later used by Don Dogoier via the Ranger Keys.

After the Zangyack's final defeat, Marvelous returned the Ranger Keys to their original owners. It is assumed Sion and his team have their powers once again, and will resume their duties as Timerangers.

Sion, alongside his team (bar TimeFire), among the majority of the Super Sentai heroes, was caught up in the "Super Hero Taisen" incident which eventually resulted in the Super Sentai teams and Kamen Riders joining forces to defeat both Dai-Zangyack and Dai-Shocker. During the final battle, he is seen piercing through one of the Gormin Sailors, and tackling Isoginjaguar

TimeGreen appeared with his team among the first 38 Super Sentai whom collectively empowered Wild Tousai Shuriken King in its fight against the titanic Gillmarda, granting the Ninningers and Zyuohgers the power to perform the Zyuoh Ninnin Super Sentai Burst which destroyed Gillmarda with the combined power of all 40 Super Sentai.

Sion joined the Super Sentai Strongest Battle as a member of Brain Team, where he partnered with FiveRed in the first round of the competition and fought against Speed Team and won the match. However, his team was eliminated either after losing the second round against the Gunman Team or the third round against the Swordsman Team. 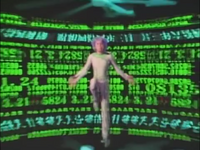 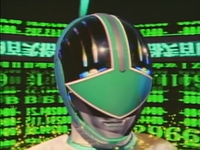 The TimeGreen Ranger Key (タイムグリーンレンジャーキー, Taimu Gurīn Renjā Kī) is Sion's personal Ranger Key and what became of his powers after he along with the rest of the 34 Super Sentai sacrificed their powers to end the Great Legend War.

This key along with the majority of the Ranger Keys were collected by the Red Pirates and later used by the Gokaigers. The TimeGreen Ranger Key was mainly used by Don Dogoier (Gokai Green), who used it to fight as TimeGreen.

The Timeranger keys, along with all the Ranger Keys of the first 33 Super Sentai, were briefly taken by the Black Cross King and turned into Ranger puppets that were fought by the Gokaigers and the Goseigers. Splitting up, the puppet TimeGreen was defeated as part of a group of surviving Green and Black warrior keys by Gokai Green and Super Gosei Black.

After Zangyack were finally defeated, the Gokaigers gave the Ranger Keys back to their rightful owners. Sion received his key and became TimeGreen once more.

TimeGreen is among the vast pantheon of Rangers which are available in the mobile game Super Sentai Battle Base.

TimeGreen appears with his team among all Sentai in the mobile game Super Sentai Legend Wars.