He was formerly known as Asuka Kagura (神楽 飛鳥, Kagura Asuka), a star pupil of Hayate Way who had the talent to become a Hurricaneger, but he mysteriously vanished, branded a Nukenin (抜け忍,, Runaway Ninja) as a result. However, it would turn out he encountered Lady Gozen, whom he devoted himself to as her personal fighter at the cost of renouncing his name and face, forced to remain in his costumed form permanently.

He has the ability to transform through the command "Face Change!" into Shurikenger Fire Mode (シュリケンジャー ファイヤーモード, Shurikenjā Faiyā Mōdo), a quicker and deeper voiced version of himself when the top of his helmet is rotated as he removes his main chest armor, which is a weight-inhibitor and once removed from his body, Shurikenger's strength, and speed increase.

Years later, Shurikenger fought alongside not only his own team but every single Sentai ranger in existence, against the Empire of Zangyack when it attacked the Earth in the Great Legend War. After fighting against hundreds of Gormin and their Zgormin commanders, Akarenger noticed the fleet moving towards them, he gathered all the Rangers together and gave them the order to sacrifice their powers to wipe out the first invasion's armada. Since he cannot demorph like most of the other rangers did, it's not known what happened to him after this, though he probably reverted to his original form. Ep. 1: The Space Pirates Appear Gokaiger Goseiger Super Sentai 199 Hero Great Battle

Asuka, as Shurikenger, appears in Shuriken Sentai Ninninger, as part of a request from President Toha Yamaji of the Committee to Protect Ninja Honor to provide winter training. Having heard from Sasuke and Yousuke how underdeveloped the Ninningers were upon meeting them early on, Shurikenger decides to assess their progress via Yokai Karuta, a game designed to review all enemies defeated that season. Owing to the interference of Yokai Kami, however, Shurikenger and the Ninningers were forced to fight many of the defeated once again. Afterward, Shurikenger comments to Yoshitaka that his pupils have truly become fine ninja, before leaving the dojo. Shinobi 43: The Legendary Ninja! Yokai Karuta Tactics

Shurikenger appeared with his team among the first 38 Super Sentai who collectively empowered Wild Tousai Shuriken King in its fight against the titanic Gillmarda, granting the Ninningers and Zyuohgers the power to perform the Zyuoh Ninnin Super Sentai Burst which destroyed Gillmarda with the combined power of all 40 Super Sentai. Doubutsu Sentai Zyuohger vs. Ninninger: Message from the Future from Super Sentai 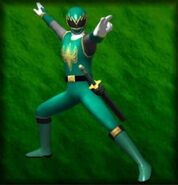 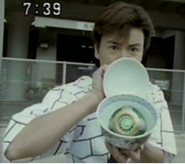 A copy of Shurikenger was created by Madogi as part of the Fake Rangers. Madogi of the Phantom Beast Corps created evil duplicates of the Earth Ninja to draw out the real ones as part of Sandaaru's plan to trap them to lure out Gozen to destroy the barrier he made with the Raging Arrow medal. Though the fakes were destroyed after this, this was part of Sandaaru's plan to take control of the Hurricaneger, Gouraiger, as well as Shurikenger with special collars to force Gozen to feel sadness so he could remove the Grieving Bow medal she possessed from within her body. Scroll 48: Trap and Eternal Life

Retrieved from "https://powerrangers.fandom.com/wiki/Shurikenger_(Original)?oldid=915314"
Community content is available under CC-BY-SA unless otherwise noted.