Shun Namiki (並樹 瞬, Namiki Shun) is MegaBlue (メガブルー, Mega Burū) of the Megarangers. He is 18 years old (19 as of Gingaman vs. Megaranger and 32 as for the Great Legend War in Gokaiger} and a loner who aspired to become a computer-graphics artist.

Shun was one of four students of the "Digital Research Club" from Moroboshi High (alongside fellow students Kouichirou Endou, Chisato Jougasaki and Miku Imamura) investigating strange occurrences and technology being created at the NASADA plant in connection to the works of I.N.E.T., unknowing that Kenta Date, a fellow student, had already been recruited for their research. When the Nezireigia began their invasion pre-emptively, the four students and Kenta were all given Digitizers and the task of becoming Megaranger in order to battle the invaders from the twisted realm.

At first Shun had no interest in befriending Kenta or being a Megaranger, considering both to be useless things that would interfere in his dreams of graphic design and attending school in America. When SaiNezire and the Kunekune invade the CG center where Shun is working on his latest project, Shun refuses to evacuate and Kenta takes it upon himself to protect him until Shun can save his work. Upon realizing what Kenta was willing to risk in order to protect a friend's dream, Shun sacrifices his data to save Kenta from the Nezibeast, realizing that while programs could be remade and replaced, humans and friends could not and completely dedicated himself to to the team.

TV STORY-Ep. 3: For Real! A Huge Nezire Beast Afterwards, despite the difference in their personalities, Shun and Kenta became close friends with unbeatable teamwork both on and off the battlefield. Their bond would later hold the key to victory during the fight with Giga Gurail in episode 30 when Shun received a head injury while shielding Kenta, afflicting him with amnesia and robbing him of all his memories. Despite his disbelief that a high school student like himself could possible be able to fight opponents with such terrifying power, after encouragement from one of his teachers, Shun reluctantly went to aid Kenta and was able to recover his memories after Kenta took an energy blast meant for him. Afterward, the two used a variation of a maneuver used earlier during a school basketball game and managed to temporarily split Giga Guirail back into two beings before facing him alongside the others in Super Galaxy Mega.

In episode 10, Shun met and befriended a mysterious young woman who Prof. Kubota later identified as one of a series of mass produced androids used by the Nezirejia to musically hypnotize humans into committing acts of violence but who had broken free due to a malfunction in her control unit. After hearing that I.N.E.T. planned to have her dismantled for being an enemy creation, Shun attempted to hide her only to be attacked by Neo KoumoriNezire. After realizing the truth of her existence and seeing Shun and the other Megarangers about to be killed, the android used a flute that belonged to Shun's mother to neutralize Neo KoumoriNezire's sound-wave attack but sustained heavy damage and in a final act of sacrifice; ran toward the Nezi beast but self destructed before she could reach him. The sight of her death sent the normally calm Shun into a berserk rage as he attacked and mortally wounded Neo KoumoriNezire before finishing his giant form off along with the others in Galaxy Mega.

In addition to his combat skills, Shun is also the team strategist such as when he was able to confuse the Neziranger by making the others' costumes look like his.

MegaBlue is among the Sentai warriors seen in clips when Daimon Tatsumi (GoYellow) lectured Kai Samezu (GaoBlue) about the past Sentai technical warriors and their fighting spirit.

Shun's appearances in the "Versus Series", Megaranger vs. Carranger and Gingaman vs. Megaranger, are featured in the Super Sentai Versus Series Theater, hosted by the heroes of Tensou Sentai Goseiger. Hyde (Gosei Blue) also dresses as Shun in the Megaranger cosplay.

Years later, Shun fought alongside not only his own team, but every single Sentai ranger in existence, against the Empire of Zangyack when it attacked the Earth in the Great Legend War. After fighting against hundreds of Gormin and their Zgormin commanders. AkaRenger noticed the fleet moving towards them, he gathered all the Rangers together and gave them the order to sacrifice their powers to wipe out the first invasion's armada. The MegaBlue powers are later used by Joe Gibken via the Ranger Keys.

After the defeat of Ackdos Gill, Captain Marvelous returned all the Ranger Keys to the former Sentai heroes. It is assumed Shun and his teammates received their keys, allowing for them to utilize their powers once again.

Shun, alongside his team (bar MegaSilver), among the majority of the Super Sentai heroes, was caught up in the "Super Hero Taisen" incident which eventually resulted in the Super Sentai teams and Kamen Riders joining forces to defeat both Dai-Zangyack and Dai-Shocker.

MegaBlue appeared with his team among the first 38 Super Sentai whom collectively empowered Wild Tousai Shuriken King in its fight against the titanic Gillmarda, granting the Ninningers and Zyuohgers the power to perform the Zyuoh Ninnin Super Sentai Burst which destroyed Gillmarda with the combined power of all 40 Super Sentai.

As MegaBlue, Shun's personal crest is the Digital Television which enables him to create a variety of digital and holographic illusions. 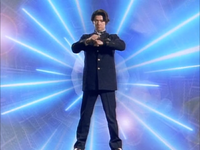 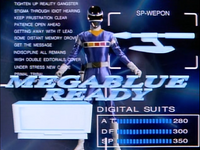 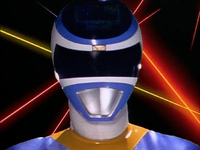 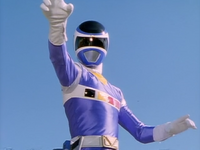 The MegaBlue Ranger Key (メガブルーレンジャーキー, Mega Burū Renjā Kī) is Shun Namiki's personal Ranger Key and what became of his powers after he along with the rest of the 34 Super Sentai sacrificed their powers to end the Great Legend War.

This key along with the majority of the Ranger Keys were collected by the Red Pirates and later used by the Gokaigers. The MegaBlue Ranger Key was mainly used by Joe Gibken (Gokai Blue), who used it to fight as MegaBlue.

The Megaranger keys, along with all the Ranger Keys of the first 33 Super Sentai, were briefly taken by the Black Cross King and turned into Ranger puppets that were fought by the Gokaigers and the Goseigers. Splitting up, the puppet MegaBlue was defeated as part of a group of surviving Blue warrior keys by Gokai Blue and Super Gosei Blue.

After Zangyack were finally defeated, the Gokaigers gave the Ranger Keys back to their rightful owners. Shun received his key and became MegaBlue once more.

MegaBlue appears with his team in the Denji Sentai Megaranger video game.

Shun Namiki/MegaBlue: to be added

MegaBlue is among the vast pantheon of Rangers which are available in the mobile game Super Sentai Battle Base.

MegaBlue appears with his team among all Sentai in the mobile game Super Sentai Legend Wars.