Shoji of the Heavenly Gravity Star

Shoji of the Heavenly Gravity Star ("天重星" 将児, "Tenjūsei" Shōji) is TenmaRanger (テンマレンジャー, Tenma Renjā, Pegasus Ranger) of the Dairangers. He is 20 years old (39 years old in the final episode of Gokaiger) and specializes in the Long Fist.

Shoji was nineteen years old when he became a Dairanger. His greatest dream in life was to become a world boxing champion. He is very playful and comical, but he also has a very strong sense of fair play. He could only apply his competitiveness to Kazu because the others weren't interested in such. He wears his emotions on his sleeves and is never afraid to fight.

During one of his training sessions, a boy named Kenbo was captured by the Gorma. After he failed to defend him, he tries to redeem himself, and succeeded in saving him.

TV STORY-Ep. 2: It's Qi Power!! He and Kazu were the first to come face to face with Key Jester's homicidal dolls. When no one believed him, Daigo did.

He was frightened by Ryo's father when he overpowered three of his teammates and when Kaku asked him to look after Ryo, he did so. As a true friend, he was determined to protect him.

Shoji's personal opponents were The Three Gorma Stooges, who loved to play games and he taught them by example to put the urge to concentrate on their moral fiber above the need to cheat to win.

He would have frivolous crushes on women, but never on Rin, perhaps because he regarded her as more of a sister than anything. In Episode 11, he had to rescue a girl who he had a terrible crush on and managed to turn a magnet-Gorma's own power against it. In Episode 32, he was trapped inside a birdcage-Gorma with a little girl he was trying to save. He managed to get out by catching a ride with it's Familiar, a huge vulture-like bird. It was in Episode 40 wherein his influence on the Three Stupid Gorma first became too strong to be denied. Because of him, they placed honor before defeating him and may have died permanently.

Multiple copies of Tenmaranger were created by Copy Empress using photos she took of the Dairangers. The first was a human clone created during a day at the pool; while a second was created alongside the first in order to double-team the respective Dairanger. A third was created in a team meant to face KirinRanger before he destroys all the clones with his RodArrow.

Later, Shoji, alongside his team, joined forces with the Fivemen, Jetmen, Zyurangers, and Kakurangers to defeat the evil Emperor Daidas and his forces.

TenmaRanger is among the Sentai warriors seen in clips when Daimon Tatsumi (GoYellow) lectured Kai Samezu (GaoBlue) about the past Sentai technical warriors and their fighting spirit.

Years later, Shoji fought alongside not only his own team, but every single Sentai Ranger in existence, against the Empire of Zangyack when it attacked the Earth in the Great Legend War. After fighting against hundreds of Gormin and their Zgormin commanders. Kaijou noticed the fleet moving towards them, he gathered all the Rangers together and gave them the order to sacrifice their powers to wipe out the first invasion's armada. The Tenma Ranger powers are later utilized by Joe Gibken via the Ranger Keys.

After the Gokaigers finally defeated the Zangyack, he appeared alongside his friend Kazu/KirinRanger during the ending of Gokaiger where he gets his Ranger key back.

Shoji, alongside his team (bar KibaRanger), among the majority of the Super Sentai heroes, was caught up in the "Super Hero Taisen" incident which eventually resulted in the Super Sentai teams and Kamen Riders joining forces to defeat both Dai-Zangyack and Dai-Shocker. During the final battle, he is seen fighting Zatsurig and Doukoku Chimatsuri.

TenmaRanger appeared with his team among the first 38 Super Sentai whom collectively empowered Wild Tousai Shuriken King in its fight against the titanic Gillmarda, granting the Ninningers and Zyuohgers the power to perform the Zyuoh Ninnin Super Sentai Burst which destroyed Gillmarda with the combined power of all 40 Super Sentai.

. However, the Dairangers were beaten in the first round by Team Ex-Aid

, with TenmaRanger being defeated by Beet Buster.

Shoji joined the Super Sentai Strongest Battle as a member of Speed Team, where he partnered with Blue Swallow and fought against TimeGreen and FiveRed of Brain Team in the first round. Ultimately, both he and his teammate lost the match and was eliminated from the competition.

As TenmaRanger, Shoji uses a variation of Long Fist called Pegasus-Fist which enables him to control gravity, allowing him to levitate and move objects and opponents in a manner similar to telekinesis as well as to increase his own speed and agility. 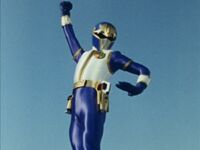 In the original concept of Dairanger titled Chuuka Sentai Chinaman, TenmaRanger is present as one of the five Dairangers, with minor costume differences.

The TenmaRanger Ranger Key (テンマレンジャーレンジャーキー, Tenma Renjā Renjā Kī) is Shoji's personal Ranger Key and what became of his powers after he along with the rest of the 34 Super Sentai sacrificed their powers to end the Great Legend War.

This key along with the majority of the Ranger Keys were collected by the Red Pirates and later used by the Gokaigers. The TenmaRanger Ranger Key was mainly used by Joe Gibken (Gokai Blue), who used it to fight as TenmaRanger.

The Dairanger keys, along with all the Ranger Keys of the first 33 Super Sentai, were briefly taken by the Black Cross King and turned into Ranger puppets that were fought by the Gokaigers and the Goseigers. Splitting up, the puppet TenmaRanger was defeated as part of a group of surviving Blue warrior keys by Gokai Blue and Super Gosei Blue.

After Zangyack were finally defeated, the Gokaigers gave the Ranger Keys back to their rightful owners. Shoji received his key back, allowing him to become TenmaRanger once more.

Shoji of the Heavenly Gravity Star/TenmaRanger: to be added

TenmaRanger is among the vast pantheon of Rangers which are available in the mobile game Super Sentai Battle Base.

TenmaRanger appears with his team among all Sentai in the mobile game Super Sentai Legend Wars.