The Shogunzords were legendary lost Zords, found by Baboo, Squatt and Finster on the planet Zordina so that Lord Zedd may use them to conquer Earth. Following this he powered them up and brought them online. When he requested to be teleported to the Command Center for a parley, Zedd forced the Rangers to pilot them and destroy Earth with them, in exchange for the safety of a kidnapped Kimberly. After a rescue misson, Tommy was able locate Kimberly and teleport both of them back to the Command Center. During the course of the misson, Billy was able to gain control of the Shogunzords; as a result, Zedd lost the upper hand as well as the Shogunzords. The Shogunzords could combine and form the Shogun Megazord, and they could make a pyramid formation, which destroyed monsters in a whirlwind. The Shogunzords are humanoid robots of different colors (much like the Alien Rangers' Battle Borgs) and with different armor around the head, the heads resembling the animals the Ninjazords were based on. The Shogunzords are considerably more useful than the Ninjazords, due to their all having humanoid forms, as well as all having their own weapons.

The arc in which the Shogunzords featured prominently is therefore the same arc in which Kimberly is written out of the series, and set during the transition period before Katherine comes to replace her. After this, when the Shogunzords are used, both Tommy and Kat pilot the White Shogunzord together. Some American and British viewers saw the introduction of a second set of Zords partway through a season as an instance of jumping the shark, though Power Rangers obviously remained popular after this (and the inclusion of a second set of Zords partway through the series would become standard practice throughout the following series). 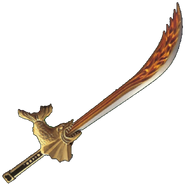 Shogunzords with their individual weapons.

The White Shogunzord is a warrior Zord piloted by Tommy Oliver, and later co-piloted by Katherine Hillard. It was later used by Delphine. It somewhat resembles a crane. It forms the left arm of the Shogun Megazord and the Shogun MegaFalconzord. It is armed with dual sai weapons. It is the only individual Shogunzord to have more than one pilot. When Delphine teleported into the Zord, it rose into being in front of an aurora borealis.

White and Pink Rangers in the cockpit.

The Black Shogunzord is a warrior Zord patterned after a frog and piloted by Adam Park, and later by Corcus. It forms the left leg of the Shogun Megazord and the Shogun Mega Falconzord. It is armed with a large bow and arrow. When Corcus teleported into the zord, it rose into being in front of a rising dust burst of rocks.

Black Ranger in the cockpit.

The Blue Shogunzord is a warrior Zord patterned after a wolf and piloted by Billy Cranston, and later by Cestro. It forms the right arm of the Shogun Megazord and the Shogun Mega Falconzord. It is armed with a staff weapon. It was the only Shogunzord to be seen defeating a monster on its own; Billy confronted the Brick Bully on his own when Tommy, Rocky, Aisha and Adam had been turned into bricks by the monster and Kat was trying to return them to normal. When Cestro teleported into the Zord, it rose into being in front of a raging tidal wave.

Blue Ranger in the cockpit.

The Yellow Shogunzord is a warrior Zord patterned after a bear and piloted by Aisha Campbell, and later by Tideus. It forms the right leg of the Shogun Megazord and the Shogun Mega Falconzord. It is armed with a rake-like claw chain weapon. When Tideus teleported into the Zord, it rose into being in front of a mass of yellow leaves blowing in the wind.

Yellow Ranger in the cockpit.

The Red Shogunzord is a warrior Zord patterned after an ape and piloted by Rocky DeSantos, and later by Aurico. It forms the head and torso of the Shogun Megazord and the Shogun Mega Falconzord. It is armed with a shield. When Aurico teleported into the Zord, it spun into being among Flames and in front of a stormy sky.

Red Ranger in the cockpit.

PLEX designed the Shogun Megazord. Its design is based on classic Japanese fortresses as well as ancient shoguns, while its helmet is that of a "paper crane" design, similar to its predecessor. Its shoulders and Fire Saber are adorned with "Shachihoko" gargoyles; that is, an ancient Chinese mythical monster with the head of a tiger and the body of a monstrous spiky fish. The Shogun Megazord's chest has the kanji for "Shinobi" on it. It retains the shapes of the Power Coins as designed for Kakuranger. The "S" symbol on the Red Shogunzord's belt and shield likely refer to Sun Wukong, or the legendary Monkey King (just like the Red Ape Ninjazord).