At the climax of the Great Legend War, the ShodoPhones as transformation devices were made redundant when the Shinkengers sacrificed their powers with the rest of the first 34 Super Sentai to destroy the invasion force of the . Resurfacing as Ranger Keys, the Shinkenger powers would be used by the to assume their forms via the Gokai Change. Ultimately, the Gokaigers returned their borrowed powers to their rightful owners after overthrowing Zangyack.

The brush mode allows for much more than transformation, however. The right kanji (provided that it is written in the correct stroke-order) can do whatever its meaning indicates like summoning horses("馬"), defend("捍"), or used their respective element but they have limits on how they can summon and use it that depends on the amount of Mojikara they have. During their samurai training, the four retainers are seen practicing their calligraphy, summoning up winds, leaves, and waves of water. In battle, the brush mode can be used as an improvisational weapon, used to summon forth anything the Shinkenger may need to combat the Gedoshu. It can also be used to enlarge their Origami, by inscribing the "Big"(大) kanji on it and can initiate the combination of their Origami by inscribing the "Combine"(合) kanji. 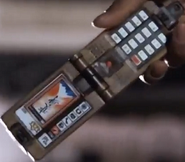 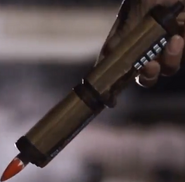 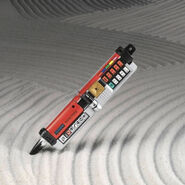