"It seems they've finally awakened eh--?"
―Shitari of the Bones' first words when witnessing the Rokumon Junk rising out of the Sanzu River.[src]

"Dokoku! Dayu! Sorry, but I'm surviving! Whether it's in the Sanzu River or in the mud... living is my Gedou fate!"
―Shitari of the Bones before being sealed back in the Netherworld.[src]

"Is this how I meet my end? Unbelievable!"
―Shitari of the Bones' final words before his death.[src]

Shitari of the Bones (骨のシタリ, Hone no Shitari) was the Gedoshu's strategist who saw humans as mere specimens for his research and the secondary antagonist of Samurai Sentai Shinkenger.

At the start of the series, he is shown to have been waiting on the other side for a long period for the return of Dokoku Chimatsuri, whose junk re-emerges on the Sanzu River years after the Gedoshu leader was ripped apart by a former generation of the Shinkengers. Immediately allying himself with Dokoku, he shows himself performing other plans regarding the Ayakashi to flood the Sanzu River for passage to the human world that generally were crueler and not the same as typical Ayakashi, which generally made him not trustworthy to Dayu Usukawa, another of Dokoku's allies.

One of Shitari's most important research projects is the discovery of a certain character used in the past by the 17th Shinken Red which had defeated Dokoku in order to neutralize it's power. To do so, he heads into the human world and even assists more unworthy Ayakashi to help his master find a way to have no further threats from the Shinkenger.

Unlike the other Ayakashi on Dokoku's side, who either have their own agenda or are traitorous to his ideals, Shitari is the most loyal of the minions, choosing to watch over him and make sure everything he does is for his own purpose for flooding the river as planned. When Dokoku chose to enter the human world briefly to fix Dayu's shamisen (with Akumaro Sujigarano previously promising but choosing to use it for his own means), Shitari is the one who warns him about the problems the lack of water will perform on him and ultimately must drag him back to the Sanzu River to recover when his body nearly dries out mere minutes after arriving and destroying everyone, including the Shinkengers, with ease.

With his master out of action and the return of Kaoru Shiba, the true 18th Shiba Clan leader, Shitari attempted to hasten Dokoku's recovery and flooding the Sanzu, even sacrificing one of his two lives to give a third life to Oborojime. However, it was Dayu's own sacrifice that lead to Dokoku's recovery and the Sanzu River's overflowing. As the Rokumon Junk emerged in the human world, Shitari stood by Dokoku's side for the invasion. However, as the Shinkengers finally stop the Gedoshu leader, Shitari is sucked back into the Underworld as the Sanzu receded. As admitted by Shitari himself, he could have left to attack the Shinkengers but that would have likely been suicide so better to be sucked away and live to fight another day than die and that be the permanent end of the Gedoshu.

After Dokoku's final defeat, Shitari tried to assist in bringing him back a year later by generating fear and destroying the Goseigers with the aid of Madakodama, but instead saw the revival of another villain: Buredoran of the Chimatsuri. Completely against Buredoran's plans, Shitari planned to use his remaining Ayakashi forces to betray him, but was stopped by the Kaizoku Sentai Gokaiger, who had intercepted his plans while travelling to the past themselves for their own mission. Shitari is finally killed by Captain Marvelous transformed into Go-On Red utilizing the Kankan Mantan Gun.

Unlike other Gedoshu, Shitari had already given his second life to Oborojime and therefore does not return as a giant.

TV STORY-The Future is the Past 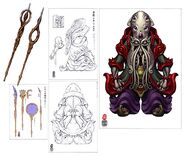 Shitari of the Bones Concept Art