Daizyuzin (大獣神, Daijūjin, Great Beast God) is the combined form of the five primary guardian beasts, who first combine into the Beast Battle Tank DinoTanker and then transform further into Daizyuzin. Rather than a mere robot, Daizyuzin is actually a physical incarnation of the Ruling God of the five tribes. As such he has his own will and occasionally gives challenges or suggests the right actions for the Zyurangers to help on their quest to be real heroes.

He can also fire laser beams from his eyes, lightning from his crown or energy blasts from the cannons on his back. 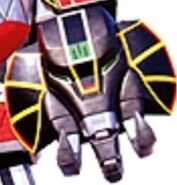 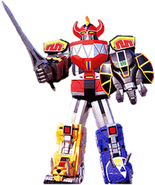 Firing Cannons on back

When Burai was revived and given the Sword of Hellfriede, Daizyuzin told Geki to fight Burai. Geki refused and Daizyuzin was forced to attack him for letting his personal feelings override his duty as a Zyuranger. All was soon resolved when Geki finally managed to reach Burai's heart and Burai's tears destroyed the sword whereupon Daizyuzin officially announced that Burai would be the sixth Zyuranger. Prior to Burai's redemption, Bandora had learned of a prophecy of Daizyuzin's defeat and Grifforzer, Lamie Scorpion, and Burai worked together to hurl him into a lava pit as a solar eclipse had cut off Daizyuzin's power. Fortunately, the prophecy had only foreseen Daizyuzin's defeat rather than his death and after using the energy of the lava to re-energize, Daizyuzin returned in time to stop Dragon Ceasar from destroying the city while under Burai's control.

Despite being a god, Daizyuzin was far from invincible as it was revealed during the battle with Satan Franke that in the initial battle with Dai-Satan, Daizyuzin's true form had been split into three lesser aspects (Daizyuzin, Dragon Caesar, and King Brachion). After the Zyurangers performed a ceremony at an ancient alter where they "gave voice to their mission" Daizyuzin's full power was restored, enabling him to fight the new and more powerful Dokita-Dora Monsters on an equal level as well as to combine with Dragon Ceasar and King Brachion to form Zyutei Daizyujin and then Ultimate Daizyuzin.

The five core Guardian Beasts are the patriarchal gods of the individual tribes. Like Daizyuzin, they are physical incarnations rather than mere robots and have various innate sacred powers.

The first Guardian Beast to be awakened, the Guardian Beast Tyrannosaurus (守護獣 ティラノザウルス, Shugojū Tiranozaurusu) is Geki's Guardian Beast and the god of the Yamato tribe. Bigger and stronger than the other primary Guardian Beasts, sometimes acting alone in combat, when he could use his tail and jaws as weapons. He had the ability to fire energy blasts from his eyes. He is able to vaporize giant Dora Monsters with his Tyranno Sonic (ティラノソニック, Tirano Sonikku), a blast of Sonic Energy fired from his mouth and can stand on his tail to deliver jump kicks to its enemy. During the battle with Dora Sphinx in episode 5, rather than let Geki pilot him, Tyrannosaurus instead sent Geki into the future where he was confronted with the barren wasteland Bandora planned to turn the Earth into unless the Zyurangers learned to make their hearts as one. When Tyrannosaurus is called upon, he comes from under the earth. Forms the head and body of Both DinoTanker and Daizyuzin.

The Guardian Beast ZyuMammoth (守護獣 ジューマンモス, Shugojū JūManmosu) is Goushi's Guardian Beast and the god of the Sharma tribe. First introduced in episode 3. He can blow a glacial gas called Moth Blizzard (モスブリザード, 'Mosu Burizādo) of -200°C from its trunk to freeze enemies. When ZyuMammoth is called upon, he comes from a glacial area. When the command Combine, Dino or Dragon Mission is given ZyuMammoth becomes DinoTanker's back, chest, and cannons; Both Daizyuzin's and Gouryuujin's back & arms & Daizyuzin's Mammoth Shield.

The Guardian Beast Triceratops (守護獣 トリケラトプス, Shugojū Torikeratopusu) is Dan's Guardian Beast and the god of the Etof Tribe. First introduced in episode 3. He is equipped with the dual Tricera Cannons (トリケラカノン, Torikera Kanon) on the tip of his tail and his two horns can be shot out on chains to ensnare giant opponents. When Triceratops is called upon, he comes from a desert area. Forms the left tread of DinoTanker, and both Daizyuzin's and Gouryuujin's left legs.

The Guardian Beast SaberTiger (守護獣 サーベルタイガー, Shugojū SāberuTaigā) is Boi's Guardian Beast and the god of the Daim Tribe. First introduced in episode 3. His running speed exceeds that of all the other Guardian Beasts. He also has a mighty laser gun called the Saber Gun (サーベルガン, Sāberu Gan) on his tail and can slash opponents with its teeth. When SaberTiger is called upon, he comes from a jungle area. Forms DinoTanker's right tread and Daizyuzin's and Gouryuujin's right legs.

The Guardian Beast Pteranodon (守護獣 プテラノドン, Shugojū Puteranodon) is Mei's Guardian Beast and the god of the Risha Tribe. First introduced in episode 3. She is the only Guardian Beast with flying abilities, and her flying speed can go as high as Mach 2.5. She fires Ptera Beam (プテラビーム, Putera Bīmu) from its wings. When Pteranodon is called upon, she comes from a volcano. Forms DinoTanker's back and Daizyuzin's chest. For the toy, her feet detach and form the barrels for DinoTanker's cannons.

When the five core guardian beasts first come together, they form into Beast Battle Tank DinoTanker (獣戦車ダイノタンカー, Jū Sensha DainoTankā) which attacks enemies with his dual Beast Tank Cannons (獣戦車キャノン, Jūsensha Kyanon), or with lightning blasts from the eyes of each Guardian Beast called the Beast Tank Storm (獣戦車ストーム, Jūsensha Sutōmu). When assuming the form of Daizyuzin, DinoTanker's cannons fold in to switch out with the hands (DinoTanker's cannons detatch for this stage and relocate onto the back), DinoTanker rises up into a humanoid shape as Triceratops and Saber Tiger become the legs, Pteranodon detaches from the back and flies around to the front, Tyrannosaurus' face folds into his chest to reveal Daizyuzin's head before Pteranodon docks onto the front to form the chest, and finally a horn on either side of Daizyujin's head folds out from behind.

Episodes: 6-7, 10, 12, also appears for a short time during the formations to Daizyujin past Episode 12.

Inside view during transformation into Daizyujin 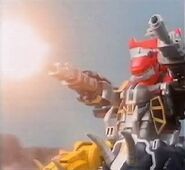 With no one inside

Years later, Guardian Beast Tyrannosaurus appeared as part of an army of robots, animals, jets, machines and vehicles belonging to the first 25 red heroes. As anticipated by Sokichi Banba, they were led by Akira Shinmei and Chief Counsellor Naoyuki Miura to help fight Lost Highness Rakushaasa.

Daizyuzin, as one of the past Sentai Giant Robos, imbued Hyakujuu Gattai GaoKing with its power to defeat the giant Lost Highness Rakushaasa.