Shane Clarke is the Ninja Storm Red Wind Ranger, leader of the Ninja Rangers, and the primary protagonist of Power Rangers Ninja Storm.

Shane was a student at the Wind Ninja Academy along with his best friends Tori Hanson and Dustin Brooks, he is also known for his skateboarding skills.

After Lothor attacked the academy, Sensei Kanoi Watanabe chose Shane to be the Red Wind Ranger.

TV STORY-Prelude to a Storm

It was soon revealed that Shane is scared of spiders.

TV STORY-Beauty and the Beach

When he was a young boy, Shane saved an alien woman from a bounty hunter name Vexacus, and that alien later returned and gave Shane the power of the Battlizer armor.

When the Bradley brothers, Hunter and Blake, show up in town, Shane stresses the importance of knowing who to trust to Dustin as Shane is the only one to suspect that the brothers aren't who they say they are.

Shane doesn't come to trust Hunter or Blake until the incident with Toxipod. During that time, Shane is aggravated with the fact that Hunter and Blake always seem to have ill intentions when their groups meet in battle. When the fact that both Blake and Hunter have been brainwashed by Choobo is revealed to him and his friends, Shane slowly comes to trust Blake and Hunter when they are brought back to their senses.

Thanks to his ninja training, Shane possesses several superpowers independent of and prior to the acquisition of his Ranger skills. Like his fellow ninja, Shane possesses superhuman speed and can move faster than the eye can see, leap higher than an average person, evade detection by normal persons, and focus his inner energies to resist mental attacks and manipulation. Shane's ninja powers give him the ability to control the element of air for effects including projecting gusts of wind as an offensive weapon, and "walking" on air as if on solid ground.

Shane's older brother, Porter, who was a successful businessman, was concerned about Shane's seeming lack of a sense of responsibility, and paid him a visit, lecturing his younger brother on the matter. After accidentally discovering that Shane was the Red Ranger, however, Porter gained significant respect for Shane, realizing the measure of responsibility that his younger brother had taken upon himself. This encounter is important in Power Ranger history, for it shows that not only is the existence of Power Rangers known to the world at large, but that people are also aware of specifics regarding them; Porter was especially proud of the fact that not only was Shane a Power Ranger, but that he was the Red Ranger, acknowledging the fact that Red Rangers are traditionally the leaders of Power Ranger teams. This, while most likely not intentional or referenced, probably stemmed from the Space Rangers' revelation of their identities to the world way back in Power Rangers In Space.

After Shane and his two Wind Ranger teammates defeat Lothor, he becomes an instructor at the Wind Ninja Academy.

When Lothor comes back in Power Rangers Dino Thunder, Shane temporarily becomes evil alongside his teammates. They battle the Dino Rangers, but are set free by their comrades. The Ninja and Dino Rangers then team up to do battle with Lothor and Mesogog's combined forces, with him teaming up with Red Dino Ranger Conner McKnight. Afterwards, the Wind Rangers lose their powers again, leaving things to the next generation.

Shane and the other Wind Ninja Rangers returned as part of the army of Legendary Rangers that helped the Mega Rangers defeat the Armada once and for all, fighting in a huge battle against hundreds of X Borgs and dozens of Bruisers.

Shane is a headstrong young man who will take his missions seriously, he is an excellent skateboarder, and his love of flight is evident in his fighting style. Shane finds himself discovering his natural ability as a leader throughout the course of Power Rangers: Ninja Storm but also discovers that he also needs to depend on the strength of his teammates and friends as well as his own abilities. Despite all of this, Shane also sports a kind and friendly personality, he always watches out for his friends and tries to make sure Tori, Dustin, and later Cam stay out of trouble.

Due to their Ninja training, The Wind rangers have several special powers common to ninjas, them being: 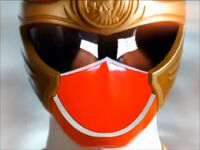 The Red Wind Ranger represents the Ninja Rangers for the Ninja Storm Dino Charger that was originally planned to be part of Dino Charger Power Pack Series 3, but was ultimately never released. This Charger would've been paired with the Dino Charge Dino Charger.