"Damn you... Did you think I'd let you go after making a fool out of me?!"
―Serial Thief Dorpa's first words enlarging himself[src]

A chameleon-themed thief. He was sent by Dolnero to steal the Reda Virus vaccine from the City Guardians, so the Londerz could sell it to make a great profit out of its' importance. TimeFire attempts to keep the vaccine away from Dorpa before TimeBlue battled him, leaving Dorpa open for attack by TimeRed, Pink, and Green. Angered, Dorpa enlarged himself and battled Shadow Beta and V-Rex Robo before being brought into custody. 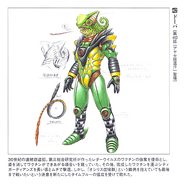