RangerWiki
Register
Don't have an account?
Sign In
Advertisement
in: Articles in need of major additions, Mashin Sentai Kiramager, Sentai Ranger,
and 6 more

Sena started out playing piano when she was a kid.

She earned the name Supersonic Princess during her first official career as a karuta player in her younger days. She went to college with Natsume Masaki, who was a senior of Sena's. Eventually, she pursued her new life to be a full-time track and field athlete, where she became famous as of the present day where SCRTC became her sponsor due to her and Natsume knowing each other from college.

A speed demon and daredevil, Sena often proves very excitable due to her track running, and former Karuta careers. That also leaves her with a great love of high speeds. She is also hot-headed due to this, but has a bubbly and empathetic nature, and is a soft person on the inside. She is an eager member of the group, and often charges in the battle headstrong, sword in hand. Although she does have a squeamish side, often shown to be cowardly against the attacks of Darkness Megabeast Mecha Smog Jouki and Catcher Ligany. In episode 37, Yodonna's whip accidentally splits Sena into 5 clones. Each clone is based on an aspect of her personality; namely, Sena 1 (瀬奈1, Sena Ichi), her athletic side, Sena 2 (瀬奈2, Sena Ni), her cute side, Sena 3 (瀬奈3, Sena San), her smart side, Sena 4 (瀬奈4, Sena Yon), her emotional side, and Sena 5 (瀬奈5, Sena Go), her pessimistic side. 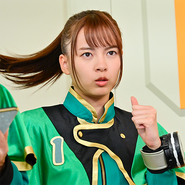 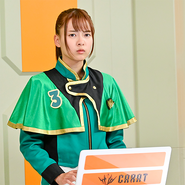 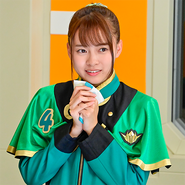 Using the Kiramai Changer, Sena can access her Kiramager Form by pressing on the red button that symbolizes a Kiramager Helmet and then spins the "tire" to transform into her Kiramager Form allowing her to become Kiramai Green. In this form she has access to individual weapons and mechas that she can use in battle against Yodonheim and their Jamenshi.

Using the Kiraful Go Arrow, Sena and/or her teammates can access this power Kiramager Form by pressing on the red button that symbolizes a Go Kiramager Form and then fires the arrow to transform into her Go Kiramager Form allowing her to become Go Kiramai Green. In this form she has access to the Kiraful Go Arrow and a mecha that she can use in battle against Yodonheim and their Jamenshi. However, this form can only last about 100 seconds (1 minute and 40 seconds) for the remainder of their time in battle. After which they have to recharge in order to use this form again.

The 速 (Haya, 速) of her name means speed, matching her interest and career. Her given name, Sena, is derived from the surname of the late three-time Formula One world champion Ayrton Senna[3].