Number 9: In Order to Meet Again

These are a Dial Fighter duo that can perform a team finisher by using their blades to cut the Gangler Monster to pieces. By initiating a Kaitou Boost with it, a Lupinranger can summon the Blade Boomerang which can split into two and the Scissor Shield. A finisher can be performed where the Boomerang Blade is thrown, then it cuts the opponent to destruction. It can be accompanied by other finishers. 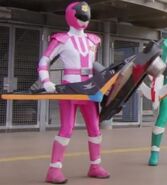 Sometime before the Lupin Collection was stolen by the Gangler, those two Dial Fighters disappeared under unknown circumstances. Eventually, they ended up in the hands of the Gordini family, being worn together as a pendant by Emma Gordini before being granted to Kairi Yano, who unsealed them via his VS Changer.

TV STORY-Number 11: I Will Continue Shooting

Blade Dial Fighter (ブレードダイヤルファイター, Burēdo Daiyaru Faitā) is one half of the Dial Fighter combo, the other being the Scissors Dial Fighter. The Blade Dial Fighter is a smaller jet-like Dial Fighter that has the ability to transform into a sword-like Attack Mode by folding the front portion of the wings under the cockpit. Additionally, it is small enough to unlock the Safes of already enlarged Ganglers (although their Collection Pieces still remain small). Forms the sword of LupinKaiser Knight, and it docks onto Scissors when not in use. Its code is 2-0-0.

The Hammer Dial Fighter (ハンマーダイヤルファイター, Hanmā Daiyaru Faitā) is a brown auxiliary Dial Fighter modeled after a tiltrotor. Its code is 8-8-0. It is a transformed version of the Blade Dial Fighter.

It is the temporarily transformed version of the aforementioned Blade Dial Fighter after it was hit by Pitch Cock's weapon, which normally changes the gender of the target but in this case somehow affected a change from blade to hammer, the result surprising even him.

Its finishing move is the GoodStriker Cutting Slash (グッドストライカー ぶった斬っちまえスラッシュ, Guddo Sutoraikā Buttagitchimae Surasshu), where LupinKaiser uses the Scissors Dial Fighter to reach a certain height and then do a downward slash with the Blade Dial Fighter, while falling with enough power to destroy 20 Brez Arenishka clones bunched together with the main body.

Number 16: Because You're A Friend