For the GingaPink from Galaxy Sentai Gingaman, see Fujiminian Ginga Pink.
For the character of the same name from Chikyuu Sentai Fiveman, see Crystalian Saya.

Saya (サヤ, Saya) is GingaPink (ギンガピンク, Ginga Pinku) of the Gingamen. She is 17 years old (18 in GoGoFive vs. Gingaman and 30 as for The Great Legend War in Gokaiger) and a part of the 133rd generation of Gingamen.

Saya has a strong admiration for Hyuuga and sisterly affection for Ryouma that gives her courage to fight against the Balban with her comrades. She loves climbing trees and is always playing or competing with Hikaru, which often leads to arguments and misunderstandings between them. Saya is a strong but introverted girl, her "earth" element is nature and later, with the Lights of Ginga, Saya can become Super Armor Shine GingaPink (超装光ギンガピンク, Chōsōkō Gingapinku).

Ginga Pink is among the Sentai warriors seen in clips when Miku Imamura (MegaPink) lectured Sae Taiga (GaoWhite) about the past female Super Sentai warriors and their shared mastery of disguise and habit of changing their clothing in the blink of an eye, something that Sae had never done before.

Saya's appearances in the "Versus Series", Gingaman vs. Megaranger and GoGo-V vs. Gingaman, are featured in the Super Sentai Versus Series Theater, hosted by the heroes of Tensou Sentai Goseiger. Eri (Gosei Pink) also dresses as Saya in the Gingaman cosplay.

Years later, Saya fought alongside not only her own team, but every single Sentai ranger in existence, against the Empire of Zangyack when it attacked the Earth in the Great Legend War. After fighting against hundreds of Gormin and their Zgormin commanders. Kaijou noticed the fleet moving towards them, he gathered all the Rangers together and gave them the order to sacrifice their powers to wipe out the first invasion's armada. The GingaPink powers are later used by Ahim de Famille via the Ranger Keys.

After the defeat of Ackdos Gill, the Gokaiger returned all the Ranger Keys to the former Sentai heroes. Saya and her teammates have their powers again.

Kozukozu Mita cosplays as Saya in the third episode of the first season of Hikonin Sentai Akibaranger.

Saya, alongside her team (bar Hyuuga), among the majority of the Super Sentai heroes, was caught up in the "Super Hero Taisen" incident which eventually resulted in the Super Sentai teams and Kamen Riders joining forces to defeat both Dai-Zangyack and Dai-Shocker. During the final battle, she is seen fighting Zangyack Commander Daiyarl and Yaiba of Darkness.

GingaPink appeared with her team among the first 38 Super Sentai whom collectively empowered Wild Tousai Shuriken King in its fight against the titanic Gillmarda, granting the Ninningers and Zyuohgers the power to perform the Zyuoh Ninnin Super Sentai Burst which destroyed Gillmarda with the combined power of all 40 Super Sentai.

Saya joined the Super Sentai Strongest Battle as a member of Legendary Team, but didn’t get to participate in the competition because her team was eliminated after losing the first round against Vehicle Team.

As GingaPink, Saya has the ability to channel her Earth power into flower based attacks 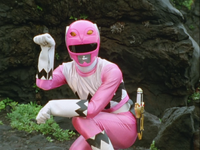 The GingaPink Ranger Key (ギンガピンクレンジャーキー, Ginga Pinku Renjā Kī) is Saya's personal Ranger Key and what became of her powers after she along with the rest of the 34 Super Sentai sacrificed their powers to end the Great Legend War.

This key along with the majority of the Ranger Keys were collected by the Red Pirates and later used by the Gokaigers. The GingaPink Ranger Key was mainly used by Ahim de Famille (Gokai Pink), who used it to fight as GingaPink.

After Zangyack were finally defeated, the Gokaigers gave the Ranger Keys back to their rightful owners. Saya received her key and became GingaPink once more.

GingaPink is among the vast pantheon of Rangers which are available in the mobile game Super Sentai Battle Base.

GingaPink appears with his team among all Sentai in the mobile game Super Sentai Legend Wars.