The Sasori System (サソリ座系, Sasori-Za-Kei, Scorpion System) is a star system home to an extra-terrestrial human race bearing scorpion tails from which Stinger heralds from. As one of the 88 Constellations, it is part of the space dominated by the Space Shogunate Jark Matter, with its power embodied by its very own legendary Kyutama and Voyager wielded by the native Kyuranger warrior.

While seizing the 88 constellation systems, Shogun Don Armage personally addressed Scorpio; a Sasori warrior, Scorpio had grown to seek power to the point of selling out his own tribe to Jark Matter, leaving them to be slaughtered while turning his back on even his younger brother Stinger. Space.5: 9 Ultimate Saviors Enticing Scorpio to serve Jark Matter in exchange for the power he sought, Don Armage transformed him into a scorpion monster; initially enlisting Scorpio as an assassin, the Shogun would be pleased enough by his service, which included the elimination of the Oushi System dissident Dr. Anton, that he would eventually promote him to Karo of the subjugated Sasori System. Space.13: Stinger's Challenge To His Brother! 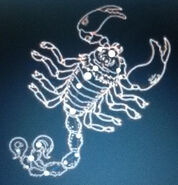 The Sasori / Scorpio Constellation
Add a photo to this gallery

The Sasori Kyutama (サソリキュータマ, Sasori Kyūtama, lit. Scorpion Nine Ball) is the Kyutama which embodies the constellation Scorpius. Awakened in the Sasori native Stinger, it allowed him to become Sasori Orange, granting him control of the Sasori Voyager. 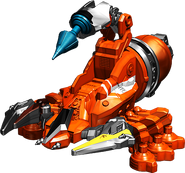 Sasori Orange
Add a photo to this gallery

Retrieved from "https://powerrangers.fandom.com/wiki/Sasori_System?oldid=864208"
Community content is available under CC-BY-SA unless otherwise noted.