Act 21: The Father and Son Bears

"Sorry to keep you waiting! Sasamatage is waiting! Hey! No one's here! I've got time to kill! I'm just brimming with power. So I'm just going to be a menace by myself."
―Sasamatage upon arriving on the Rokumon Junk only to find out no one was here.[src]

"Oh? ShinkenRed? Please don't get in the way. Aren't my eggs that can turn humans to Gedou just lovely?"
―Sasamatage when confronted by the Shinkengers.[src]

"Unforgivable!"
―Sasamatage when trying to stop Takeru from charging at him with his Daizantou and his final words before his initial defeat.[src]

"What're you doing?!"
―Sasamatage after having his egg attack knocked back at him by DaiKaiOh West Mode and his final words before his death.[src]

Finding the Rokumon Junk empty, Sasamatage decides to cause trouble on his own by placing his eggs on humans to make them violent. The eggs can also be used as explosive projectiles. He is destroyed by the teamwork of Shinken Red, Blue and Yellow, Sasamatage enlarges and is quickly destroyed by the teamwork of Tenkuu ShinkenOh's Tenku Bamboo Slice with help from DaikaiOh West.

According to folklore, the kameosa (瓶長, kameosa) is an old bottle that has been possessed and has an infinite amount of liquid inside. Sasamatage's right shoulder, which appears to be a bottle spilling sake, is thought to be the basis of this legend.

Sasamatage was a playful and energetic Ayakashi who had a tendency to speak in effeminate manner. 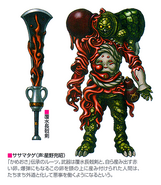