The Samuraizers are the Morphers used by the main five Samurai Rangers.

The Samuraizers allows for much more than transformation, however. The right kanji (provided that it is written in the correct stroke-order) can do whatever its meaning indicates. During their samurai training, the five Rangers are seen practicing their calligraphy, summoning up winds, leaves, and waves of water. In battle, it can be used as an improvisational weapon, used to summon forth anything the Samurai Rangers may need to combat the Nighloks. The Samuraizer is also used to summon the zords and forming a megazord as well as to activate Mega Mode. 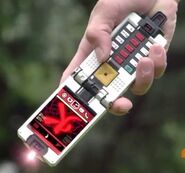 Samuraizer in use
Add a photo to this gallery

The modern form has a light atop the cellphone mode to execute symbol powers. It opens like a flip-top cell-phone. Unlike older Samuraizers, the current ones don't have the ability to fold another way into brushes. Like the Wild Force Growl Phone, the Mystic Morphers, the Overdrive Trackers and the Cell Shift Morphers, this one is cell-phone based.

Lauren uses a previous Samuraizer design to transform into the Red Samurai Ranger. It was passed down to her from her father, who had been the previous Red Samurai Ranger. While mostly, it is identical to the current Samuraizers in appearance, it also has the ability to split vertically down the middle for a brush mode used to channel symbol power. 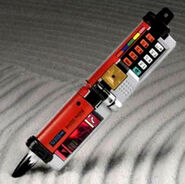 Brush Mode
Add a photo to this gallery

Ji is shown to have a gold version of the modern day Samuraizer that can both contact the rangers and use symbol power, though its unknown if his Samuraizer has a morphing functñion. The symbol power it generates is golden brown. 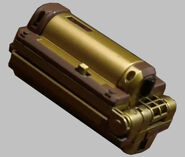 Ji's gold Samuraizer (closed)
Add a photo to this gallery

The Samurai Morpher is a Samuraizer that Antonio created himself.

The Ancient Samurai Rangers have a brush-form Samuraizer stylized from wood. It predates and is similar to Lauren's, which was handed down to her by her father.

With the call "Samuraizer! Go Go Samurai!" and writing their respective Samurai Symbols of Power in the air, they initiate their morph from civilians, to their samurai garbs, to their Ranger form by clicking the center of the Samuraizer.

Symbol Power is the basic power of the Samurai Rangers, based off of Japanese kanji. Using their Samuraizers to draw their respective kanji, or texting the kanji in Antonio's case, the rangers are able to morph, activate their zords, attack Nighlok, and many other feats. The symbol power however, seems very draining on the Rangers, such as when Kevin attempts to catch the SwordfishZord and he lost consciousness, or when Antonio attempted to activate the Black Box and nearly passed out. When using Symbol Power the Rangers sometimes say "Symbol Power" or "Samurai Symbol" then the name of the symbol

Retrieved from "https://powerrangers.fandom.com/wiki/Samuraizer?oldid=912437"
Community content is available under CC-BY-SA unless otherwise noted.