Shinken-Oh was released in Japan. The mecha was show-accurate, complete with five mecha with the ability to go from emblem mode to origami mode. The mecha was released in all territories showing Samurai Sentai Shinkenger. It was released in North America in 2013 as part of the Sentai series for collectors under the name Deluxe Samurai Megazord. While it retained all of its paint apps, details, stickers, & Japanese packaging the box also comes with a removable sleeve that says Deluxe Samurai Megazord, shows the contents of the box on it, & the Power Rangers Samurai and Power Rangers 20 logos on it as well. This toy was re-released once again in Japan in 2016 as the Shinkenger Superalloy Shinken-Oh as part of Bandai Japan's Super Sentai Artisan collector's toy line. Unlike the original release it has parts that are made of diecast instead of plastic such as the connectors on the Shishi Origami & the fists on the Kame & Saru Origami, 2 versions of the sword including a blue one to simulate the finishing attack, a collector's poster, a sheath for the sword, plastic pieces that allow the origami connect on top of each of other to form the Oden Formation, and the helmet's horns are 2 pieces that fold instead of one.

In 2011, a new Zordbuilder mold to go with the toyline for the Samurai series was released, with the ability to combine with toy-exclusive bikes. It is a bit smaller than the original release and is not compatible with the DX mecha. It can however combine with Megazord from the previous MMPR line, utilizing ZordBuilder connectors. It's individual mech range from being smaller than the original deluxe versions to being equal-sized. The Megazord form is more 'humanoid' and streamlined than the blocky DX release. It includes a fully sculpted sword. The zords are also unable to transform into their emblem modes (except for the Turtle Folding Zord) and the toy does not include a shield. Plus, the Dragon Folding Zord looks completley different from what it looks like on the show. 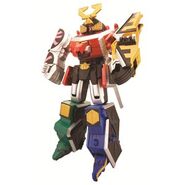 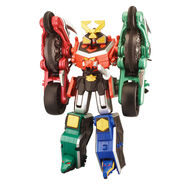 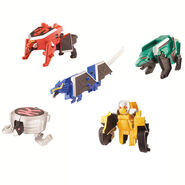 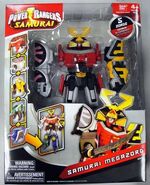 As Claw Armor Megazord
Add a photo to this gallery

The Plastic Model Kit of Shinken-Oh was by released in four sets. The plastic used was only grey, red, green and blue. The set had complete show-accurate decals. The transformation to Megazord mode was identical to the deluxe release. However, there are more points of articulation. 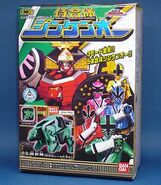 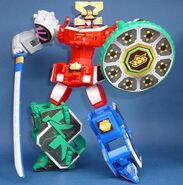 ShinkenOh painted
Add a photo to this gallery

Origami
Add a photo to this gallery

The second release featured a simplified sentai robo Shinken-Oh that could combine with other Shinkenger mecha in its set. The Ika Origami was also packed in with simplified yellow and pink origami to achieve the final combo. 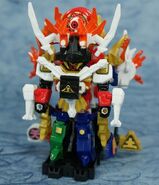 Shinken-Oh was released with as a transforming set separated in three packages.

Origami
Add a photo to this gallery

Action figures have no transformation or combiner capabilities. However they have points of articulation for multiple poses.

The Samurai Megazord is to be released for the Retrofire Megazords series. It is heavily stylized, and featured elongated design elements. It was released to coincide with the Power Rangers Samurai toyline. It featured a sword, and a shield.

Shinken-Oh was the first Sentai Super Robot Chogokin release. It is a highly articulated accurate take on the mecha with heavy detailing.

The figure also comes with a shield, a Kanji display and a sword.

Mega Bloks released Samurai Megazord, Lion FoldingZord, Ape FoldingZord, and Dragon FoldingZord as part of its continuing Power Rangers franchise. The zords are around the size of their Zordbuilder counterparts.

An SD figure of Shinken-Oh was released. The figure was attached to a removable keychain. It recalls the previously discontinued Super Sentai Robo Figures Keychains.

Retrieved from "https://powerrangers.fandom.com/wiki/Samurai_Megazord/toys?oldid=891947"
Community content is available under CC-BY-SA unless otherwise noted.