Samurai Gattai ShinkenOh (侍合体シンケンオー, Samurai Gattai Shinken'ō, Samurai Combination True Sword King) is formed when the Shinkengers write the kanji for "unite" (合, Gō) to make their Origami to combine. It is armed with the Daishinken (ダイシンケン, Great True Sword) and a giant Secret Disk that doubles as the Secret Shield (秘伝シールド, Hiden Shīrudo).

The transformation sequence begins with Shinken Red writing the kanji and shouting out, "Samurai Gattai!(Samurai Combination).The Shishi or Lion Origami becomes the head and the body, the Saru or Monkey Origami and the Kame or Turtle Origami became the arms, and the Ryuu or Dragon Origami and the Kuma or Bear Origami became the legs and the helmet. The arms and legs join together with the body and the helmet is put on to complete the transformation.

The Shishi Origami head on its body can breathe fire in the Lion's Blaze Roar (獅子火炎哮, Shishi Kaen Kō) attack. Other then that, ShinkenOh can jump to the air with the Dragon Rising Leg (龍昇脚, Ryū Nobori Kyaku), and the Kame Origami began to seperate itself on ShinkenOh to execute the Turtle Heavenly Fist (亀天空拳, Kame Tenkūken), where the Kame Origami thrust forward then spin sideways striking the enemy. Both of ShinkenOh's arms can also fold back up to unleash a unnamed beam attack.

Its finishing attack is the Daishinken Samurai Slash (ダイシンケン侍斬り, Daishinken Samurai Giri), where the kanji for "slash" (斬, Ki) appears seconds before the Shinkengers slash with their Shinkenmaru, with ShinkenOh repeating the motion. It can combine the four support Origami by performing "Samurai Armaments" (侍武装, Samurai Busō).

ShinkenOh was shown to be used by the preceeding generation of Shinkengers and had presumably originated as far back as the very beginning of the war with the Gedoushu three hundred years ago.

TV STORY-Act 45: The Impersonator The Origami that composed ShinkenOh were derived from the original Ushi Origami.

The Shishi Origami (獅子折神, Shishi Origami lit. "Lion Folding God") is Shinken Red's totem Origami that forms the head and main body of ShinkenOh. Its emblem form is an irregular pentagon (resembling that of a Shogi piece). The Shishi Origami is given to the incumbent inheritor of the name ShinkenRed in the Shiba lording family.

In battle, the Shishi Origami can rearrange itself into a plane-like form to allow it to fly. In this form, it can execute its Pentagon Grand Blaze (五角大火炎, Gokaku Dai Kaen) attack, a dive bomb attack that has the Shishi Origami ablaze that's strong enough to kill the weaker Ayakashi.

The Ryuu Origami (龍折神, Ryū Origami, lit. "Dragon Folding God") is Shinken Blue's totem Origami that forms the left leg and helmet of ShinkenOh. Its emblem form is a hexagon. The Ryuu Origami is given to the incumbent inheritor of the name ShinkenBlue in the Ikenami vassal family.

In battle, the Ryuu Origami is able to shoot a stream of blue fire in its Dragon Waterfall (龍瀑布, Ryū Bakufu) attack.

The Kame Origami (亀折神, Kame Origami lit. "Turtle Folding God") is Shinken Pink's Origami, a sea turtle, that forms the right arm of ShinkenOh. Its emblem form is a circle with a base. The Kame Origami is given to the incumbent inheritor of the name ShinkenPink in the Shiraishi vassal family.

While giant and in emblem form, the Kame Origami can create a whirlwind while spinning towards its opponent.

The Kuma Origami (熊折神, Kuma Origami lit. "Bear Folding God") is Shinken Green's totem Origami that forms the right leg of ShinkenOh. Its Emblem Form is a square. The Kuma Origami is given to the incumbent inheritor of the name ShinkenGreen of the Tani vassal family.

In battle, it is able to stand up and use its claws to maul Ayakashi.

Saru Origami (猿折神, Saru Origami lit. "Monkey Folding God") is Shinken Yellow's Origami that forms the left arm of ShinkenOh. Its emblem form is a triangle with squared-off edges. The Saru Origami is given to the incumbent inheritor of the name of ShinkenYellow in the Hanaori vassal family.

In battle, it uses its fists in punching attacks, swinging off buildings to help with momentum. 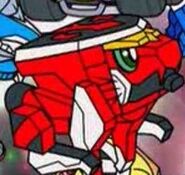 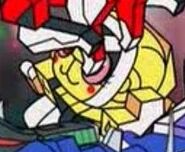 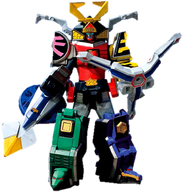 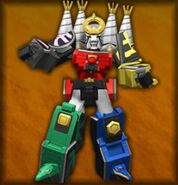 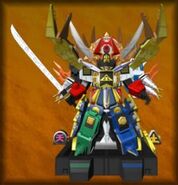 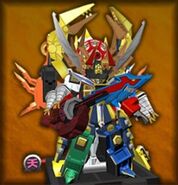 ToQ-Oh ShinkenOh is the ToQgers' version of ShinkenOh which is formed when the Shishi Origami-based Shinkenger Ressha replaces Red Ressha in ToQ-Oh. It is currently exclusive to the toyline.

The Shinkenger Ressha is the Legend Sentai ToQ Ressha associated with the Shinkengers, based on the Shishi Origami. It can replace Red Ressha in ToQ-Oh to form ToQ-Oh ShinkenOh. It is currently exclusive to the toyline.