He and Sasuke were tricked by Kappa into opening the Gate of Seals, releasing the Youkai into the human world. Sandayuu tracked them down and brought the two of them to where their ancestor's swords were placed in the Earth, where they met Tsuruhime. Upon pulling out his sword, the spirit of Saizou's ancestor appeared before him, gave him a lecture, and entrusted him with a Doron Changer, allowing Saizou to become NinjaBlue.

TV STORY-Ep. 2: A Dangerous Lady and Jiraiya, completing the team.

When Emperor Daidas and his army invaded Earth, Saizou, alongside his team, joined with the four Sentai that came before them, the Dairangers, Zyurangers, Jetmen, and Fivemen, to defeat him.

NinjaBlue is among the Sentai warriors seen in clips when Yuusuke Amamiya (Red Falcon) lectured Gaku Washio (GaoYellow) about the past Sentai sword experts, showing him that the true sword wasn't the sharpest, but the one that feeds on courage.

Years later, Saizou fought alongside not only his own team, but every single Sentai ranger in existence, against the Empire of Zangyack when it attacked the Earth in the Great Legend War. After fighting against hundreds of Gormin and their Zgormin commanders. Kaijou noticed the fleet moving towards them, he gathered all the Rangers together and gave them the order to sacrifice their powers to wipe out the first invasion's armada. The NinjaBlue powers are later used by Joe Gibken via the Ranger Keys.

After the defeat of Ackdos Gill, the Gokaigers returned all the Ranger Keys to the former Sentai heroes. It is assumed Saizou and his teammates received their keys, allowing for them to utilize their powers once again.

Saizou, alongside his team (bar Ninjaman), among the majority of the Super Sentai heroes, was caught up in the "Super Hero Taisen" incident which eventually resulted in the Super Sentai teams and Kamen Riders joining forces to defeat both Dai-Zangyack and Dai-Shocker.

NinjaBlue appeared with his team among the first 38 Super Sentai whom collectively empowered Wild Tousai Shuriken King in its fight against the titanic Gillmarda, granting the Ninningers and Zyuohgers the power to perform the Zyuoh Ninnin Super Sentai Burst which destroyed Gillmarda with the combined power of all 40 Super Sentai.

Saizou joined the Super Sentai Strongest Battle as a member of Water Warrior Team. It’s unknown whether he participated in any of the matches, but his team lost the competition either in the first round against the Police Team offscreen or won against them and lost in the second round against Super Strong Team offscreen.

At 22 years old (39 in Gokaiger), Saizou is a constantly chattering, easily flattered man who thinks he's a lot smarter than he really is. He is a loud worrywart, often jumping to immediate conclusions, as well as being the first to panic. Due to their similar flaws and personalities, he and Seikai are often found lazing about together. Despite his less-outstanding traits, he likes to help other people, making him popular among children. Unfortunately, his bad luck is often his greatest weakness. His way of talking is a little feminine, and he corresponds to Sha Wujing/Sha Gojō. 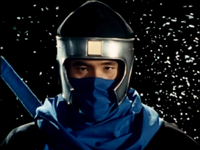 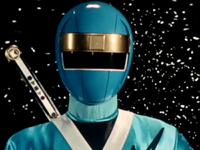 Giant Beast General Blue Logan (巨大獣将ブルーロウガン, Kyodai Jūshō Burū Rōgan): NinjaBlue's Juushou form, armed with the Logan Shaft, which is the only weapon that is not similar to the Kakuranger's personal weapon. Forms Muteki Shogun's right arm. Its name is a pun on the compound Japanese word for wolf (狼, rō).

The NinjaBlue Ranger Key (ニンジャブルーレンジャーキー, Ninja Burū Renjā Kī) is Saizou's personal Ranger Key and what became of his powers after he along with the rest of the 34 Super Sentai sacrificed their powers to end the Great Legend War.

This key along with the majority of the Ranger Keys were collected by the Red Pirates and later used by the Gokaigers. The NinjaBlue Ranger Key was mainly used by Joe Gibken (Gokai Blue), who used it to fight as NinjaBlue.

The Kakuranger keys, along with all the Ranger Keys of the first 33 Super Sentai, were briefly taken by the Black Cross King and turned into Ranger puppets that were fought by the Gokaigers and the Goseigers. The Kakuranger keys were defeated by Gokai Green.

After Zangyack were finally defeated, the Gokaigers gave the Ranger Keys back to their rightful owners. Saizou received his key and became NinjaBlue once more.

NinjaBlue is among the vast pantheon of Rangers which are available in the mobile game Super Sentai Battle Base.

NinjaBlue appears with his team among all Sentai in the mobile game Super Sentai Legend Wars.