Ep. 30: Escape! The Planet of Darkness

Victory Mars was severely damaged when it fought against the Grand Witch Grandiene-possessed Dark King Zylpheeza and Salamandes Dragon and was ultimately rendered inoperable.

The Mars Machines (マーズマシン, Māzu Mashin) are a quintet of five spacecraft designed for deep space rescue missions. Summoned by the command "Mars Machines, launch!", like the 99Machines before them, the Mars Machines are carried into battle by the GoLiner or into space by Space GoLiner.

Unlike the other Mecha, the Mars Machines have different technology that allows them to function without the aid of solar energy which makes them the only mecha able to battle efficiently when Dragon Dark King Salamandes creates the Saima Zone.  When the V-Mode Braces are inserted into their consoles and the command  "4-5-6, V! Meteor Fusion!" (流星合体, Ryūsei Gattai) is typed into them, the Mars Machines combine into Beetle Mars, which then transforms into Victory Mars.

During the combination, Blue Mars 2 splits in half to form Beetle Mars' rear legs, which then forms Victory Mars' arms.

During the combination, Yellow Mars 4 forms Beetle Mars' left front leg, which then forms the left leg of Victory Mars.

Pink Mars 5 (ピンクマーズ５, Pinku Māzu Faibu) is the Mars Machine piloted by GoPink. Like Yellow Mars, Pink Mars has a retractable manipulator claw in its dorsal hull although its arm has the extra function of spinning its manipulators to use as a drill. It is also equipped with medical tools for treating injuries during space rescues.

During the combination, Pink Mars 5 forms Beetle Mars' right front leg, which then forms the right leg of Victory Mars.

Beetle Mars is a quadruped mecha designed for landing on and transportation around alien terrain. Beetle Mars is armed with the Mars Cannon (マーズキャノン, Māzu Kyanon) on its dorsal hull which can be used either for defense or to clear obstructions to create a landing zone. It also possesses rocket boosters in all four of its legs for flight and can utilize Yellow and Pink Mars' manipulator arms to interact with its environment.

When Beetle Mars undergoes the Lightning Formation to transform into Victory Mars, Beetle Mars rises up on its front legs while the rear legs fold down to form the arms, the cockpit folds up into the chest, and the Mars Cannon detaches to form the Jet Lance.

In the GoGoFive vs. Gingaman special, when GingaiOh was defeated by the Infernal Dark Hell Beast, a damaged Victory Mars picked up the unconscious Gingamen and was automatically infused with the power of the Gingamens' Lights of Ginga to become Super Armor Shine Victory Mars (超装光ビクトリーマーズ, Chōsōkō Bikutorī Māzu), now armed with Super Armor Shine GingaiOh's armor and wielding the Super Rescue Silver Armor Sword (超救急銀鎧剣, Chō Kyūkyū Gingaiken) alongside its Jet Lance. 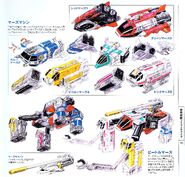