Ryuji Iwasaki (岩崎 リュウジ, Iwasaki Ryūji) is Blue Buster (ブルーバスター, Burū Basutā) of the Go-Busters. He is a warrior with excellent fighting technique, as well as the oldest of the team. His partner Buddy Roid is Gorisaki Banana.

His Buster Power is super strength. However, this has a dangerous trade-off. When Ryuji uses his power too much he will overheat and has to take time to cool down. If he completely overheats, he becomes very violent, and this puts a great toll on his body.

Ryuji is the eldest of the 3 Busters and the most level headed of the three. He is 28 years old. He's the only one, of the main 3 to not have a family member appear in the series. Though, out of all 5, only himself, and Jin, don't have any family members appear, only friends.

Ryuji was visiting Jin in the Energy Management Center 13 years ago. When the Energy Management Center was teleported into the hyperspace, Ryuji, along with Hiromu and Yoko, were given the vaccine program and left behind. Ryuji spent 13 years living with the Special Missions Department with Yoko, making him and Yoko so close that they are like siblings. He and Kuroki also started the trend of having a Christmas party every year, so that he and Yoko will not hate Christmas.

Ryuji ends up fighting a lot with Escape after she deemed him "pretty good" after fighting with him when he was overheated. He was horrified when he found out that Enter had been able to revive Escape using her backup data and that she didn't remember him anymore, as her backup did not contain memories of the Go-Busters. Escape (after she was combined with the data from a flower)repeatedly made him overheat so that she could have a good fight, nearly killing Ryuji. When Escape's data becomes too corrupted and she starts assimilating everything, Ryuji defeats her, intending to end her suffering. As Escape dies, she calls Ryuji her "Papa" and asks him if she become pretty good, to which he replies, "Yes" to give her peace. He then watches until she disappears.

Ryuji fulfilled his dream of becoming an engineer after the Vaglass were defeated.

The three Go-Busters make their first appearance in Kaizoku Sentai Gokaiger vs. Uchuu Keiji Gavan: The Movie where they take on their predecessors' nemesis, Basco ta Jolokia.

A copy of Blue Buster was created by Filmloid as part of a fake Go-Buster trio.

Two Buglars were given the appearance of Blue Buster by Sprayloid 2.

. They've been defeated, but later he has been freed from Decade's dimensional trap, and fought alongside the All Sentai and All Riders

had turn against the heroes, Ryuji summoned GT-02 to form the Go-Buster Oh. Piloted with Red Buster and Kamen Rider Fourze

were added to create the Sentai Rider Uchu Kick

, finishing the Big Machine and Diend.

When Yoko was attacked by Space Shocker

, Ryuji and Hiromu come to save her but are sucked away in a portal. Psycholon later uses its powers to bring the two boys to her once she's back on Earth. They then fight against Raider

appear to assist them, joined by Shaider

The Go-Busters were chasing a Buglar truck, until meeting with the Kyoryu Super Sentai, to help them fight Enter, the Deboth Army and Voldos. Ryuji is particularly surprised about the return of his deceased teacher Masato Jin.

Blue Buster appeared with his team among the first 38 Super Sentai whom collectively empowered Wild Tousai Shuriken King in its fight against the titanic Gillmarda, granting the Ninningers and Zyuohgers the power to perform the Zyuoh Ninnin Super Sentai Burst which destroyed Gillmarda with the combined power of all 40 Super Sentai.

Ryuji joined the Super Sentai Strongest Battle as a member of Gunman Team. It’s unknown whether he participated in any of the matches, but his team was eliminated either after losing the second round against the Brain Team or the third round against the Swordsman Team.

Cool-headed and reasonable, Ryuji is always one to keep his head in the game while his younger comrades bicker among themselves. He prefers to think of himself as an older brother instead of a father, and gets annoyed when people around him call him a father. While he is normally level headed, if Ryuji overheats because of the use of his super strength he becomes sadistic, violent and easily aggravated by anything and anyone. Ryuji was mature from a young age, which is shown by his care and love towards Yoko in her flashbacks and how he and Kuroki organized a Christmas party every year so that no one would hate Christmas. He is also very protective towards Yoko and gets very agitated when Yoko talks about romance, as he thinks that Yoko is too young for romance.

As Blue Buster uses the GB Custom Visor, Gorisaki Banana's data transfers and projects onto Blue Buster's suit to form a powerful armor based on the "protector" prototypes. Gorisaki and Blue Buster, to a degree are combined and can create stone constructs from data manifested on-grounds. Blue Buster/Gorisaki gain the attack "Gorilarge Punch" which allows Blue Buster to manifest an oversized Gorisaki fist for a supercharged punch.

Ryuji Iwasaki is portrayed by Ryouma Baba (馬場 良馬, Baba Ryōma). As a teenager, he is portrayed by Koudai Matsuoka (松岡 広大, Matsuoka Kōdai). Ryuji was briefly portrayed by Syo Jinnai (陳内 将, Jinnai Sho) in Mission 28: Beware of Chickens, when Sprayloid 2 caused his appearance to change into that of Enter, though Ryouma Baba still provided Ryuji's voice. 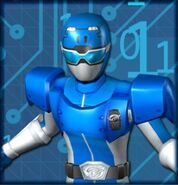 Blue Buster is among the vast pantheon of Rangers which are available in the mobile game Super Sentai Battle Base, with his Powered Custom being available as well.

Blue Buster (Powered Custom) appears with his team among all Sentai in the mobile game Super Sentai Legend Wars.