Ryouma (リョウマ, Ryōma), is GingaRed (ギンガレッド, Ginga Reddo), leader of the Gingamen. He is 22 years old (23 in GoGoFive vs. Gingaman and 35 in Gokaiger) and a part of the 133rd generation of Gingaman.

Ryouma becomes GingaRed to fulfill Hyuuga's last wish. His potential is stronger than Hyuuga's. He is bright, optimistic, and hardworking. When Hyuuga returns, Ryoma offers his saber back, but he changes his mind, to Hyuuga's pleasure. His element is fire. Later, with the Lights of Ginga, Ryouma can become Super Armor Shine GingaRed (超装光ギンガレッド, Chōsōkō Gingareddo).

GingaRed is among the Sentai warriors seen in clips when Yusuke Amamiya (Red Falcon) lectured Gaku Washio (GaoYellow) about the past Sentai sword experts, showing him that the true sword wasn't the sharpest, but the one that feeds on courage.

Led by his Liveman predecessor Red Falcon, he appeared as one of 24 previous Red Rangers in Gaoranger vs. Super Sentai together with fellow Red Rangers from his predecessors Akarenger to MegaRed to his successors GoRed and TimeRed. He had no interactions with his former teammate Gouki, who also appeared, but alongside the Dream Sentai instead.

As the twenty-second Red, GingaRed's Red Warrior Spirit was embodied by AkaRed.

Ryouma's appearances in the "Versus Series", Gingaman vs. Megaranger and GoGo-V vs. Gingaman, are featured in the Super Sentai Versus Series Theater, hosted by the heroes of Tensou Sentai Goseiger. Alata (Gosei Red) also dresses as Ryouma in the Gingaman cosplay.

Years later, Ryouma fought alongside not only his own team, but every single Sentai ranger in existence, against the Empire of Zangyack when it attacked the Earth in the Great Legend War. After fighting against hundreds of Gormin and their Zgormin commanders. Kaijou noticed the fleet moving towards them, he gathered all the Rangers together and gave them the order to sacrifice their powers to wipe out the first invasion's armada. The GingaRed powers are later used by Captain Marvelous via the Ranger Keys. Ryouma is one of several rangers (portrayed by a stand-in) who could be seen in the background when the Goseigers awoke after sacrificing their powers.

Sometime later, the 35th Sentai team, the Gokaiger, venture into the Ginga Forest in search of the Great Power of the Gingamen and are confronted by Basco and his group of Ranger Key Clones (DekaMaster, Wolzard Fire and MagiMother). Captain Marvelous chooses to attack Basco and Sally, while the others fight the Key Clones. GokaiBlue, Green, Yellow and Pink are defeated by all three Clones and blasted into a ravine below.

Nearby, Ryouma hears their bodies hit the water and rescues them soon thereafter. He warns them not to overdo things after the fall, but the four brush aside his concern, stating that some things (namely their friends) were worth taxing oneself for. As they depart, a grateful Don hands Ryouma a soggy box of doughnuts and hurries off. Later, Ryouma reunites with his brother atop a hill as the Gokaigers depart in the GokaiGalleon. Ryouma doesn't trust pirates in the least, but he was willing to make an exception for them, impressed by their willingness to help one another without hesitation.

After the Gokaigers defeated the Zangyack, Marvelous returned the Ranger Keys to their original owners. It is assumed Ryouma and his team have their powers back.

Ryouma, alongside his team (bar Hyuuga), among the majority of the Super Sentai heroes, was caught up in the "Super Hero Taisen" incident which eventually resulted in the Super Sentai teams and Kamen Riders joining forces to defeat both Dai-Zangyack and Dai-Shocker. During the final battle, he is first seen fighting Yaiba of Darkness with KirinRanger, then Weather Dopant and Black Cross King with VulEagle, and in another scene charging at a Shocker Combatman footsoldier.

GingaRed appeared as part of a conference of the first 38 Reds led by Red Falcon, whom addressed the Ninningers and Zyuohgers as the greater Super Sentai pantheon intervened to save them from defeat at the hands of the titanic Gillmarda. Empowering the Combination Nin Shuriken to form Wild Tousai Shuriken King, the first 38 Super Sentai further imbued their successors with the power to perform the Zyuoh Ninnin Super Sentai Burst, destroying Gillmarda with the combined power of all 40 Super Sentai.

Alongside Black Knight Hyuuga, GingaRed was a candidate to join the Space Squad

Ryouma alongside with his Sentai Red Ranger predecessors appeared to help the Zenkaigers.

During the climatic final battle itself, he can be seen fighting alongside Kamen Rider Amazon, GaoRed, Kamen Rider Blades and Zenkai Gaon.

As GingaRed, Ryouma is able to channel the power of Earth into fire based attacks.

Replace with transformation/rollcall image and replace infobox image with profile photo as stated in guidelines if it hasn't been.jpg
GingaRed 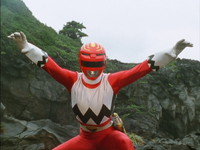 The GingaRed Ranger Key (ギンガレッドレンジャーキー, Ginga Reddo Renjā Kī) is Ryouma's personal Ranger Key and what became of his powers after he along with the rest of the 34 Super Sentai sacrificed their powers to end the Great Legend War.

This key along with the majority of the Ranger Keys were collected by the Red Pirates and later used by the Gokaigers. The GingaRed Ranger Key was mainly used by Captain Marvelous (Gokai Red), who used it to fight as GingaRed. It was also used by Gai Ikari (Gokai Silver), Ahim de Famille (Gokai Pink) and Luka Millfy (Gokai Yellow) on several occasions.

After Zangyack were finally defeated, the Gokaigers gave the Ranger Keys back to their rightful owners. Ryouma received his key and became GingaRed once more.

A female version of GingaRed, as seen in Gokaiger

A Gingaman Zyudenchi which bears the likeness of GingaRed is part of the Legend Sentai Zyudenchi toyline which can be used in Super Sentai Battle: Dice-O.

"Baban! Baban! Baban! Baban! Ba-Ba-Ba-Ban! Gingaman!"
―Past Sentai ability announcement
The Gingaman Gear (ギンガマンギア, Gingaman Gia) is one of many Sentai Gears used by the Zenkaigers to battle the Kikaitopia Dynasty Tojitendo. For Twokaizer, he uses BullBlack’s power, which allows him to calm bulls down.

GingaRed is among the vast pantheon of Rangers which are available in the mobile game Super Sentai Battle Base, with his Super Armor Shine upgrade being available as well.

GingaRed appears with his team among all Sentai in the mobile game Super Sentai Legend Wars.