Ryouga is 22 years old at the beginning of Abaranger.

He was given guardianship of Mai after his brother and sister-in-law died and does his best to raise her.

He eventually gained the power to become AbareMax.

In the epilogue, he returns to the USA, and travels across the country along with Mai.

In the world of Tsuribaka Nisshi, the Abarangers are adored by fisherman Densuke Hamasaki's son Koitaro, who takes him to an Abaranger stage show. Faced with a shortage of fish at Tokyo Bay which is believed to be the result of a monster, Densuke takes his fishing boat out in search of the monster and experiences a dream in which he, in his Fishing Fool Mask persona, teams up with the Abarangers to defeat the monster. Waking up, Densuke assures Koitaro that Fishing Fool Mask and the Abarangers are working to beat the monster. Sure enough, the fish return to Tokyo Bay soon after.

As the twenty-seventh Red, AbaRed's Red Warrior Spirit was embodied by AkaRed.

While fighting alongside Bouken Red against Time Demon God Chronos. AkaRed recreated AbaRed's Tyranno Rod to use against Chronos while Bouken Red wielded his Bouken Javelin.

Ryouga's appearances in the "Versus Series", Abaranger vs. Hurricaneger and Dekaranger vs. Abaranger, are featured in the Super Sentai Versus Series Theater, hosted by the heroes of Tensou Sentai Goseiger. Alata (Gosei Red) also dresses as Ryouga in the Abaranger cosplay.

Years later, Ryouga fought alongside not only his own team, but every single Sentai ranger in existence, against the Empire of Zangyack when it attacked the Earth in the Great Legend War. After fighting against hundreds of Gormin and their Zgormin commanders. Akarenger noticed the fleet moving towards them, he gathered all the Rangers together and gave them the order to sacrifice their powers to wipe out the first invasion's armada. Ryouga is one of several rangers (portrayed by a stand-in) who could be seen in the background when the Goseigers awoke after sacrificing their powers.

After the defeat of Ackdos Gill, the Gokaigers returned all the Ranger Keys to the former Sentai heroes. It is assumed Ryouga and his teammates received their keys allowing for them to utilize their powers once again.

Ryouga, alongside Yukito and Ranru (AbareBlack and AbareKiller were absent), among the majority of the Super Sentai heroes, was caught up in the "Super Hero Taisen" incident which eventually resulted in the Super Sentai teams and Kamen Riders joining forces to defeat both Dai-Zangyack and Dai-Shocker. During the final battle, he is seen with Riderman fighting Long.

Ryouga was kidnapped by Neo-Geilton while the Go-Busters were trying to rescue him. He, along with Geki fought the Kyoryugers because they were brainwashed by Neo-Geilton and Neo-Grifforzer respectively.

Later, Ryouga and Geki suffered from losing their Dino Hope as it was transferred to Space War God Boldos, so the monster could be born. When the Kyoryugers arrived to save them, he warned them not to come, but they ended up also losing their Dino Hope. The Go-Busters then arrived to save them but the Red warriors were taken by Neo-Geilton and Neo-Grifforzer. However, once the Go-Busters destroy the satellite containing the Dino Hope, Ryouga, Geki and the Kyoryugers regain it.

The other Dinosaur Sentais arrived as AbareBlue threw the Super Sentai Zyudenchi to Ryouga and Geki. They used it to summon the Bakuryu Tyrannosaurus and Guardian Beast Tyrannosaurus. They then transformed and fought back. After the Abarangers managed to defeat Neo-Geilton, the Zyurangers could not defeat Neo-Grifforzer by themselves so the Dinosaur Sentais combined their weapons to defeat Neo-Grifforzer. Even though they combined their weapons, Neo-Grifforzer was still alive so he absorbed their Dino Hope. He launched himself to Space War God Boldos. Once Space War God Boldos landed on Earth, the Dinosaur Sentais entered their mechas and started fighting the monsters. However, Space War God Boldos proved to be too powerful. The Go-Busters arrived to help them, allowing them to defeat Boldos. After the fight, he, along with Geki and Dantetsu watched the Kyoryugers and Go-Busters.

AbaRed appeared as part of a conference of the first 38 Reds led by Red Falcon, who addressed the Ninningers and Zyuohgers as the greater Super Sentai pantheon intervened to save them from defeat at the hands of the titanic Gillmarda. Empowering the Combination Nin Shuriken to form Wild Tousai Shuriken King, the first 38 Super Sentai further imbued their successors with the power to perform the Zyuoh Ninnin Super Sentai Burst, destroying Gillmarda with the combined power of all 40 Super Sentai.

Ryouga alongside with his Sentai Red Ranger predecessors appeared to help the Zenkaigers.

During the climatic final battle itself, he can be seen fighting alongside TyrannoRanger, Kamen Rider OOO, Kyoryu Red and Zenkai Juran.

Ryouga is an optimistic team leader. Though he's overly confident, he has an extremely good nature and is friendly, warm heart, and loving; he doesn't hate anyone. 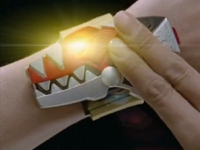 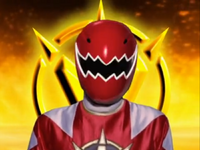 In this form, AbaRed's fighting style is similar to a Tyrannosaurus Rex by grabbing his enemies then swinging them around crashing into nearby objects then sending them flying. He can also use the white spikes on his body for slash attacks and piercing attacks, other Abarangers can also do this in their Abare Modes. 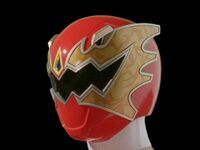 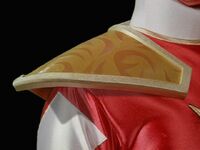 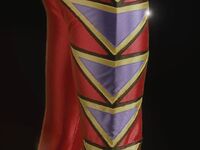 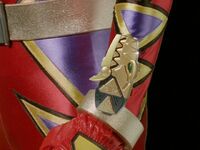 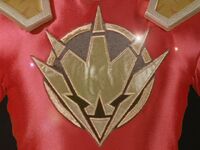 The AbaRed Ranger Key (アバレッドレンジャーキー, Aba Reddo Renjā Kī) is Ryouga Hakua's personal Ranger Key and what became of his powers after he along with the rest of the 34 Super Sentai sacrificed their powers to end the Great Legend War.

This key along with the majority of the Ranger Keys were collected by the Red Pirates and later used by the Gokaigers. The AbaRed Ranger Key was mainly used by Captain Marvelous (Gokai Red), who used it to fight as AbaRed. It was also used by Gai Ikari on one occasion.

After Zangyack were finally defeated, the Gokaigers gave the Ranger Keys back to their rightful owners. It is presumed that Ryouga received his key and became AbaRed once more.

An Abaranger Zyudenchi, bearing the likeness of AbaRed, was one of three Super Sentai Zyudenchi (スーパー戦隊獣電池, Sūpā Sentai, Super Squadron Beast Batteries) which were developed by Doctor Ulshade and the Special Operations Unit. First used by Yukito, channeling his Dino Guts to reach the Kyoryugers' MoBuckles in the past, creating a time portal to return them. He later gives it to Ryouga, who uses it to summon a replica of Bakuryuu Tyrannosaurus which later transforms into AbarenOh.

The Abaranger Ressha (アバレンジャーレッシャー, Abarenjā Ressha) appears as an SG Ressha. The actual ToQ Ressha is likely based off of AbaRed's partner Bakuryuu Tyrannosaurus; should it replace Red Ressha in ToQ-Oh, it would most likely form ToQ-Oh AbarenOh.

"Baban! Baban! Baban! Baban! Ba-Ba-Ba-Ban! Abaranger!"
―Past Sentai ability announcement
The Abaranger Gear (アバレンジャーギア, Abarenjā Gia) is one of many Sentai Gears used by the Zenkaigers to battle the Kikaitopia Dynasty Tojitendo. For Twokaizer, it summons AbareKiller’s Wing Pentact, which can create any object he needs to defeat his enemies simply by drawing it.

AbaRed is among the vast pantheon of Rangers which are avaliable in the mobile game Super Sentai Battle Base. In the case of AbaRed, he is also avaliable in Abare Mode, Gagaku Mode, and as AbareMax.

AbaRed appears with his team among all Sentai in the mobile game Super Sentai Legend Wars.